Aremu Afeez Olalekan was born in Ibadan, Oyo State, on October 3rd, 1999. He is a Nigerian professional footballer who plays as a midfielder for IK Star in the Norwegian league, and the Nigerian national team.

Aremu has played for Rivers United, Remo Stars and Sunshine Stars. A product of the amateur club, Westerlo Football Academy, the young midfielder played for Akwa United in the 2016-2017 season on loan from Westerlo, in the Nigeria Professional Football League last season and was part of the team that won the Aiteo Federation Cup. The Nigeria international joined Ghanaian club Inter Allies in December 2017. After a year, he signed a three year contract with Norwegian Club IK Start. In March 2018, he scored in his first competitive match for IK in the league opener against Tromsoe.as he was impressive and in the 90th minute capped his performance with the last goal of the game as his team won 4-1.

He included in the Gernot Rohr’s standby list for the Super Eagles’ World Cup qualification game against Zambia in October 2017, and was in action for the Super Eagles in the 2017 WAFU Nations Cup in Ghana and was part of the home based Eagles for the 2018 African Nations Championship (CHAN) qualifiers but did not participate at CHAN tournament due to his transfer to IK.

The youngster is a close friend of compatriot and fellow footballer, Abubakar Ibrahim. He is also married and has two sons.

No reviews yet for Aremu Afeez 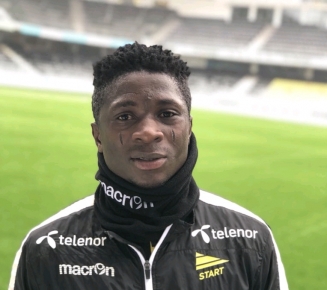