Abuja is Nigeria’s capital and serves as the political and administrative seat of government. Popularly referred to as the FCT, Abuja is domiciled in the NorthCentral geopolitical zone of Nigeria with an estimated population of 1,405,209 inhabitants. Prominent indigenous tribes in Abuja include the Gbagyi, bassa, gwandara, gade and the Hausa but almost every other ethnic affiliation that constitutes Nigeria is found in the city hence its being called the center of unity. Popular parts of Abuja include Lugbe, Maitama, Kuje and Wuse while the city comprises of 6 local councils which are Abaji, Abuja Municipal Area, Gwagwalada, Kuje, Bwari, and Kwali. The Eduaction Sector is important in the administration of the FCT and there are a large number of primary, secondary, and teriary institutions in the city. Tertiary institutions in Abuja include the Baze University Jabi, the African University of Science and Technology Galadimawa, National Open University of Nigeria Wuse, Nigerian Turkish Nile University Jabi, University of Abuja, Veritas University Bwari and the Fembury College of Technology Garki.

Abuja shares borders with Niger, Kaduna, Nasarrawa and Kogi states. The City of Abuja is divided into phases and further grouped into districts with affairs overseen by Abuja Municipal Area Council. Popular landmarks in Abuja  include the Millenium Park, Aso rock Presidential Villa, National Stadium and Nnamdi Azikiwe International Airport. The Minister of the FCT superintends over the affairs of the city through the Federal Ministry of the FCT. Abuja has followers of both the Christian and Muslim reliogions. The National Christian center and the National mosque are both aesthetic and serve as the worship grounds during important National celebrations. Tourist attractions in Abuja include the Zuma Rock, Jabi Lake, Eagle Square, National Childrens' park and Zoo, IBB Golf Course, and the Pedam Lake.

The Nigerian postal service maintains the street names, postal codes and handles the postal package of the city's residents. There are several local cuisines in Abuja which include the ever popular Suya, Kilishi and Fura d nunu. Transportation in Abuja is facilitated by the use of taxicabs, tricycles and coaster buses and the city has a good network of roads. The Abuja light rail which was initiated in 2014 is still under construction but promises to ease the stress on intra and inter city commuters. Also, the Nnamdi Azikiwe international Airport is a key landmark in abuja and offers inhabitants who intend flying in and out of the City with a veritable platform. Abuja also hosts several private and public health facilities which include the National Hospital Garki, Nisa Premier Hospital Jabi, DIFF Hospital Maitama, Hi-Fi Hospital Wuse, and the Kelina Hospital Gwarimpa.

Abuja has a total area of 54,617 km squared with annual rainfall estimated at 2000 mm per annum. The average temperature is 30 degrees centigrade with a topography that features several rocks scattered across the City’s landscape alongside flat lands with appreciable levels of vegetation. The landscape of Abuja is strewn with several rock formations whch include the Zuna rock which is 800 metres high and lies on the northern axis of the city. The city of Abuja has a tropical wet and dry climate also referred to as the Tropical savannah climate. There are 3 major seasons which are the rainy season, the dry season and the Harmattan.

The rainy season commences in April and terminates in October with the dry season running from November till March. Between the rainya and dry seasons, the harmattan occasioned by the northeast trade wind makes a brief cameo with features such as dust and dry winds.

Abuja is home to several government ministries, agencies and departments which means that a sizeable chunk of its working populace are civil servants. Agriculture also provides a means of economic engagement for the City’s populace. Most countries have their diplomatic embassies in Abuja. Also, the Organization of Petroleum Expoerting Countries has its regional office in Abuja. Abuja is also home to a collection of standard hotels owing to the high profile of most of the city's inhabitants and Visitors.

Trade also flourishes in the FCT with the area hosting several markets where a plethora of commodities are bought and sold. Popular markets in Abuja include the Nyanya market, the FCT fish market Gwarinpa, Wuse market Wuse zone 5, Garki international market, Karimo market, and the Kuje market. A number of mineral resources are also deposited in Abuja and these include Gold, Marble, Clay, Dolomite, Tantalite, Bauxite, Zinc, Lead, and Salt.

Abuja was officially created in the year 1984 and was made the capital state of Nigeria in the year 1991. Abuja was the host city of the All Africa games in 2003 while the National  stadium hosted the final game of the 2009 FIFA under 17 tournament final which was staged in Nigeria. The first Minister of the FCT was Mobolaji Ajose-Adeogun who oversaw the city's affairs from 1976- 1979. The full list of persons who have served as  Administrators/Ministers of the City is provided below 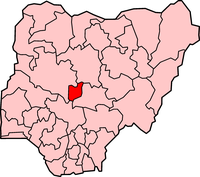 Find and explore some of the best businesses in Abuja.