Yobe state is found in the Northeast geopolitical zone of Nigeria and shares borders with states such as Bauchi, Borno, Gombe and Jigawa. The state’s capital is in Damaturu while other prominent towns include Potiskum, Gulani, Fika, and Bade.

The Governor of Yobe State is Ibrahim Geidam.

Pride of the Sahel

Yobe state is in the dry savanna belt and is largely hot and dry. Yobe state has a total area of 45,502 km squared with average precipitation at 850mm per annum.

The weather in Yobe state is generally hot with the average temperature at 34 degrees centigrade while the dry season lasts for much longer than the rainy season.

Yobe state was created in Aug 1991 from Borno state under the military administration of Gen. Ibrahim Babangida. Past Governors/administrators of the state include 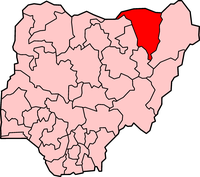 Find and explore some of the best businesses in Yobe State.