Oyo state is found in the SouthWest  geopolitical zone of Nigeria and is home to the Yoruba tribe. Ibadan is the state’s capital while other popular towns include Ogbomoso, Oje-owode, Igbo-ora and Ilero. Oyo state shares borders with Kwara, Osun, Ogun states and the Republic of Benin.

The Governor of Oyo State is Isiaka Abiola Ajimobi.

Oyo state has a total area measuring 5,580,894 km squared with a topography characterized by litters of old igneous rocks and dome shaped hills which measure between 500-1000 metres in height.

The average annual precipitation in Oyo state is 2700 mm while average temperature is 29 degrees centigrade.

Agriculture is the main economic engagement of the people of Oyo state. The state is known for the cultivation of crops such as maize, yam, cocoa, plantain, and oil palm. Animal rearing is also popular in Oyo state with cattle ranches existing in Saki and Faoola.

Oyo state was created in the year 1976 from the old Western state. Ibadan was also the administrative center of the old western region. Ibadan is also home to the Cocoa house which is the first skyscraper built in the whole of Africa. Past governors of Oyo state include 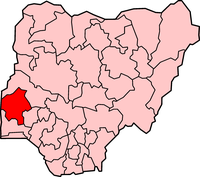 Find and explore some of the best businesses in Oyo State.