Anambra State is found within the SouthEast geopolitical enclave of Nigeria and shares boundaries with states such as Delta, Imo, Rivers and Enugu. The Capital of Anambra State is Awka while the State boasts other prominent towns such as Onitsha where the largest market in the whole of the West African region is situated and Nnewi which is fondly referred to as the Japan of Africa owing to the massive production of automobile parts and components by industries situated within the region.

The Governor of Anambra State is Willie Obiano.

Light of the Nation

Anambra State is home to the longest river in Nigeria which is the River Niger. About 35 percent of the State's total mass consists of water.  The State also boasts a tropical savanna climate with average annual rainfall estimated at 3800 mm per annum. The average temperature of Anambra State is 25 degrees centigrade with a topography prone to gully erosions but comprising of arable farmlands for agricultural activities.

The people of Anambra State are mostly businessmen and women with the state having the lowest poverty rate in the whole of Nigeria. The City has a high affinity for commerce as exhibited by activities within and around the Onitsha Main Market. Also, Agriculture is another dominant economic activity engaged in by inhabitants of Anambra State and the State which has very arable soil is known for producing crops like rice and yam in very appreciable quantities. Also, Fishing and Animal husbandry contribute to the state's economy.

Following the recognition of Anambra State as an Oil producing state, oil exploration has also contributed immensely to the economic live of the state especially after the construction of the Orient Petroleum Refinery in Aguleri with an average output of 3000 barrels of crude oil per day. Other mineral resources found in Anambra state include kaolin, clay, Natural gas, Iron stone, sand stone, Lignite, pyrite, and Lateritic clay. Trade is another important feature of the economy of Anambra state with the state hosting several markets which include the Onitsha main market, Bridge head market, Ogboefere market, Building materials market Ogidi, Marine Modern market, Ogbaru main market, Ose Okwodu market, and the Electronics market Onitsha.

Anambra State was created in the year 1976 after being carved out from the Old East Central State which had its capital in Enugu. Anambra state is also blessed with a rich historical and cultural heritage and has important festivals such as the Ofala and New Yam festivals.

Anambra is home to one of the most illustrious monarchies in Igboland known as the Obi of Onitsha which has spanned hundreds of years. Anambra state has had a number of political leaders under both the civillian and millitary dispensations. Past governors/administrators in the state include 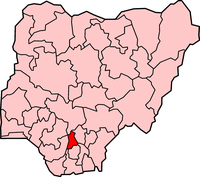 Find and explore some of the best businesses in Anambra State.