The Governor of Kano State is Abdullahi Umar Ganduje.

Kano state falls under the Sudan Savannah and has two distinct seasons; the rainy and dry seasons with an estimated annual precipitation of 1300 mm.

Kano state also boasts an area of 20,131 km squared with an average temperature of 33 degrees centigrade and humidity of 36 percent.

Kano state prides itself as the centre of commerce with the trade of a wide range of commodities contributing immensely to the state's economy. Markets such as the Kurmi Market, the Kantin kwari market, Dawanau market, Wudil Cattle market, Yan'Lemu market, and the Sabon Gari market attract thousands of merchants and buyers on a daily basis. The state also has a number of industries  spanning across the textile, tanning, plastics, ceramics and furniture sectors.

Kano state was created in May 1967  from the defunct Northern Nigeria region and has an illustrious Emirate spanning several decades with the current Emir being Emir Sanusi Lamido Sanusi (111).

Past governors/ administrators of Kano state include 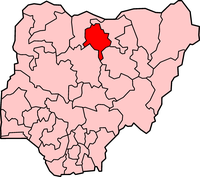 Find and explore some of the best businesses in Kano State.