Gombe state is under the NorthEast geopolitical zone of Nigeria and shares boundaries with Adamawa, Bauchi, Yobe, Borno and Taraba states. The capital of the state is Gombe while other prominent towns include Bajoga, Biliri, Kaltungo, Kumo and Dukku.

The Governor of Gombe State is Ibrahim Hassan Dankwambo.

Gombe state has a total area of 18,768 km squared with annual temperature at 37 degrees centigrade. The topography is largely mountainous and flat open with average humidity pegged at 44 percent.

The total area of Gombe state measures about 20,265 km squared with the dominant soil types being the loamy and the sandyloam with appreciable amount of clay found in some parts of the state.

Gombe State is both an agricultural and commercial state. Crops cultivated in Gombe state include grains such as rice, beans, millet, and maize while there is also an appreciable level of animal rearing.

Trade is also a prominent feature of the economic life of Gombe state with popular markets such as the Gombe Main market, Kindiyo market Balanga, Kuri Cattle market Yamaltu Deba, and the Tudun Hatsi grains market attracting thousands of buyers and sellers on a daily basis.

A number of mineral resources are found in Gombe state and these include clay, limestone, uranium,coal, diatomite, graphite, calcite, mica, gemstone, and gypsum.

Gombe state was formed from the old Bauchi state on the 1st of October 1996 with Group Capt. Joseph Orji as the pioneer administrator from October 1996 - august 1998. 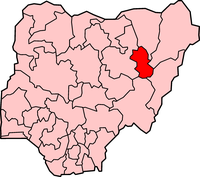 Find and explore some of the best businesses in Gombe State.