Jigawa state is found in the North-West geopolitical zone of Nigeria. The state’s capital is in Dutse while other prominent towns include Birnin Kudu, Biyi, Kazaure, and Ringim. Jigawa state shares borders with Kano, Katsina, Bauchi, Yobe and Niger republic.

The Governor of Jigawa State is Badaru Abubakar.

Jigawa has a total area of 23,015 km squared with a topography characterized by undulating land and sand dunes. The vegetation is the Sudan Savannah with features of the Guinea Savannah foun in some parts of the state while there are notable rivers such as hadejia, kafin and Iggi. The average temperature in Jigawa is 35 degrees centigrade with annual precipitation at  1550 mm.

The Basement complex is found in the southern parts of Jigawa state while the northern parts consist of sedimentary rocks akin to those in the Chad formation. The Sudan savannah vegetation part of Jigawa state consists of expansive lands covered with lush green vegetation suitable for Animal grazing.

Inhabitants of Jigawa state engage in both Subsistence farming and Animal husbandry with over 70 percent of the state's population engaging in these economic activities. Commerce is also popular with a free trade zone established in the border town of Maigatari.

Jigawa state was created from Kano state in the year 1991. The state has had a number of governors/administrators which include 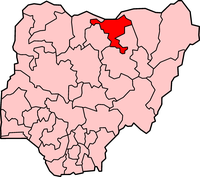 Find and explore some of the best businesses in Jigawa State.