Lagos state is domiciled in the SouthWest  geopolitical zone of Nigeria and is the Country’s most economically valuable state. The state capital is in ikeja while other  popular towns in Lagos state include Yaba, Badagry, Lekki and Ikorodu. Lagos state is bordered by Ogun state, Republic of Benin and the Atlantic ocean. Lagos state has a total of 20 Local government areas which include Alimosho, Ajeromi/Ifelodun, Kosofe, Mushin, Oshodi Isolo, Ojo, Ikorodu, Surulere, Agege, Ifako-Ijaiye, Somolu, Amuwo Odofin, Lagos Mainland, Ikeja, Eti-Osa, Badagry, Apapa, Lagos Island, Epe, and Ibeju-Lekki and these LGAs are further divided into 56 Local council Development Areas.

Lagos city is a haven for fun seekers and persons in need of hospitality with the city boasting a range of Hotels suitable for people of diverse financial strengths.Popular hotels in Lagos include the Oriental Hotel, Villa Toscana, Eko Hotel and Suites, Royal Ibis hotel, Four points by Sheraton, Lagos Continental hotel, The Moorhouse, Amar Suites, and the Beni Gold Hotels. Club goers in Lagos state have an array of night hangout spots to visit and these include Quilox, Rumors, Escape, Club Pravada, The Garage by Caliente, Niteshift Coliseum, and the Unique Gentlemen's Club.

The Governor of Lagos State is Akinwunmi Ambode.

Lagos state has both waterlocked and  landlocked regions popularly referred to as the Island and the Mainland respectively. The total area of Lagos state is 3,577 km squared and has two distinct seasons; the rainy and dry seasons with a rainfall distribution of 3000 mm per annum and average temperature at 25 degrees centigrade.

Lagos state has an average humidity of 51 percent while the major soil types are the loamy and sandy soils due to the abundance of beaches in the state.

The Atlantic ocean also runs through the state as well as a number of water bodies which include rivers and canals.

Lagos state has a very vibrant economy that cuts across every sector of the economy. The state’s proximity to the atlantic ocean makes it a choice destination for imports and exports with the presence of 3 seaports playing a prominent role in this regard. Lagos state also boasts an unending list of industries that manufacture several different commodities. 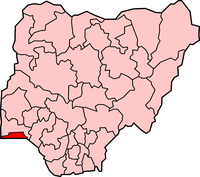 Find and explore some of the best businesses in Lagos State.