Benue State shares boundaries with Ebonyi and Enugu States and is famed for its leading role in Agricultural activities in Nigeria. The tribes found in Benue State include the Tiv, the Idoma, Etulo, Abakpa, Jukun, Akweya, Nyifon Ufia and the Igede. Christianity and Islam are the major religious persuasions of the people of Benue State. Notable festivals held in Benue state include the Akata fishing festival in Katsina Ala LGA, Kwagh-ir festival, Pupet festival, Orokamu masquerade festival, Igede Agba New Yam festival, Aje-Alekwu festival, and the Orureshi festival in Owukpa.

The Governor of Benue State is Samuel Ortom.

Food Basket of the Nation

Benue State is home to one of the longest rivers in Nigeria which is the River Benue. The state falls under the Tropical Savannah climate and the topography is excellent for agricultural activities with a favorable climate and excellent rainfall distributiion.

With a total area of 34,059km squared,the average annual temperature of Benue State is estimated at 25 degrees centigrade with an average annual precipitation of 2850 mm gathered over the rainy season which usually lasts from the month of April to October. The soil is also excellent for crop cultivation with extensive grasslands ideal for animal rearing.

Agriculture is the predominant economic activity of the inhabitants of Benue State. Over the years, the state has played a pivotal role in the cultivation of crops in Nigeria. Prominent among the agricultural produce in Benue state are crops such as Yam, Rice, Sorghum, Soybean, beans and Maize.

Benue State was created in the year 1976 from the former Benue-Plateau State and the State derives its name from the River Benue. Major General Abdullahi Shelleng was the State's first administrator and he presided over the State's affairs from March 1976 to July 1978. The full list of the past governors/administrators of Benue state include 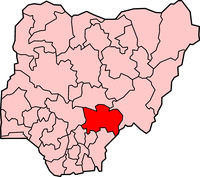 Find and explore some of the best businesses in Benue State.