Rivers state is situated in the SouthSouth geopolitical zone of Nigeria and has the city of Portharcourt as its capital. Rivers state is bordered by the Atlantic ocean, Imo, Abia, Anambra, Akwa Ibom, Bayelsa, and  Delta state. The most populous ethnic groups in Rivers state include the Ikwerre, Ibani, Eleme, Okrika, Ogoni and Kalabari. Rivers state has a total number of 23 LGAs which include Abua Odual, Ahoada east, Ahoada west, Akuku-Toru, Andoni, Asari Toru, Bonny, Degema, Eleme, Emohua, Etche, Gokana, Ikwerre, Khana, Obio Akpor, Ogba-Egbema-Ndoni, Ogu-Bolo, Okrika, Omuma, Opobo-Nkoro, Oyigbo, Port harcourt, and Tai with an estimated total population of about 5,185,400 inhabitants. Rivers state is the 6th most populous state in Nigeria with a rapidly growing population that tripled in the 15 years between the 1991 and 2006 population census.

Christianity and traditional religions are the the most widely practiced faiths in Rivers state. Transportation in Rivers state is mostly by Land or by water with movement of people and goods facilitated by buses, taxicabs, tricycles and ferries. Rivers state is popular for a number of local cuisines with the most popular being the Boli and fish which consists of roasted ripe plantain served with a sauce made of fish and several spices. Rivers state has one of the highest literacy levels in the entire southsouth region with Male literacy pegged at 53 percent and female literacy at 48 percent. Rivers state is also a multilingual society with the over 20 ethnic affiliations such as the Abua, Ikwerre, Ibani, Opobo, Eleme, Okrika, Kalabari, Etche, Ogba, Ogoni, Engenni, Egbema, Obolo, Ekpeye, Andoni, Bille, Kula, Ndoni, Nkoro, and Saro that populate the state having their own languages and/or dialects. English is a common means of communication with its variant widely known as pidgin English being very popular among the state's inhabitants. Tertiary Institutions in Rivers state include the National Open University of Nigeria, Nigerian Institute of Safety Professionsals, University of Port harcourt, Rivers state College of Arts, Rivers state College of Health Science and Technology, Rivers state University of Science and Technology Port harcourt, Ignatius Ajuni University of Education and the Port harcourt Polytechnic.

The Governor of Rivers State is Nyesom Ezenwo Wike.

Treasure Base of the Nation

Rivers state has features of both the Tropical rainforest and Mangrove swamp and has quite a number of rivers within its territory. Rainfall distribution is quite appreciable at 4300 mm per annum. Average temperature of Rivers state is 26 degrees centigrade. The rainy season lasts from March till December with the dry season lasting only two months.

The topography of Rivers state can be broadly classified into three variants , the freshwater and mangrove swamps plus the coastal sand ridges. The coastal land ridges are characterized by sandy loam soils and are suitable for the cultivation of several crops such as coconut, oil palm and cocoyam. The terrestrial parts of Rivers state account for about  60 percent of the states total area while the riverine areas make up the remaining 40 percent.

Rivers state has very large deposits of crude oil and natural gas and has played a prominent role in the Nation’s oil and gas sector. Other mineral resources found in Rivers state include glass sand, clay, marble, Lignite, Crude oil, natural gas, and silica sand. Fishing is also a popular economic engagement of the people of Rivers state. Also, farming provides a source of income for the inhabitants of Rivers state with the cultivation of oil palm, melon and plantain at an appreciable level. Rivers state also has an international airport, two seaports and a plethora of industries scattered over the state's territory. Several multinational companies in the oil and gas sector are present in Rivers state with the notable ones being the Royal Dutch shell, Agip, and Mobil.

Rivers state was created in the year 1967 from the old eastern region and derives its name from the several rivers that are found within the state’s territory. The state which derives its name from the several rivers that flow within its territory was part of the Oil Rivers Protectorate for a period between 1885 and 1893. In 1893, Rivers state became part of the Niger coast protectorate. In the year 1900, there was a merger between  the territories of the Royal Niger Company to create the colony of Southern Nigeria. Rivers state was formed following the disintegration of the Eastern Region. Rivers state lost territory in 1996 when Bayelsa state was carved out of it.

Former Governors of Rivers state include 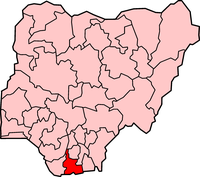 Find and explore some of the best businesses in Rivers State.