Found in the SouthWest geopolitical region of Nigeria, Ogun state has the city of Abeokuta as its capital. Ogun state is bordered by Lagos, Oyo, Osun, Ondo states including the Republic of Benin. Popular towns in Ogun state include Otta, Akute, Sagamu, Ijebu-ode, Ilaro and Ayetoro.

The Governor of Ogun State is Ibikunle Amosun.

Ogun state has a total area of 16,980,055 km squared with average annual rainfall of 2600 mm and temperatures averaging at about 28 degrees centigrade. Ogun state also has several rivers and tributaries which include the Ogun and Yewa rivers.

Ogun state's landscape is also characterized by the presence of rocks which include the famous Olumo rock.

Ogun state was created in 1976 from the old Western region during the regime of the Late Murtala Muhammed.

Historical sources claim that Ogun state was founded by a hunter named Sodeke who also doubled as the leader of the Egba refugees. Sodeke was believed to have fled from the Oyo empire in the time the empire was undergoing serious political crisis and settled in the area now known as Abeokuta in the year 1830.

Past governors of Ogun state include 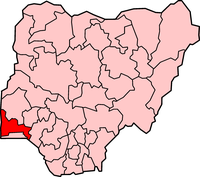 Find and explore some of the best businesses in Ogun State.