With an estimated population of 4, 151,195 inhabitants, Islam and Christianity are the most widely practiced religions in Borno State. Borno State shares boundaries with Adamawa, Gombe and Yobe States with the City of Maidugiri as the State's Capital. Popular landmarks in Borno state include the University of Maiduguri, a federal government owned tertiary institution and the Maiduguri Sports Stadium which is the home ground of El-kanemi football club, an indigenous professional football club in Nigeria. A number of privately and government owned hospitals are found in Borno state and these include the Kanem hospital and Maternity home Maiduguri, Atal Medical Center Maiduguri, Borno state Medical Center Maiduguri, University of Maiduguri Teaching Hospital, Nakowa specialist Hospital, State specialist hospital Maiduguri, and the Umaru Shehu General Hospital.

In recent times, Borno state which prides itself as the Home of Peace has been hit by a string of violent occurences precipitated by the activities of the Islamic sect Boko Haram which have led to massive loss of lives and property.

The Governor of Borno State is Kashim Shettima.

Rainfall distribution in Borno State is pegged at 1,300 mm per annum and the prevalent climate is the Semi-arid climate.

Borno State came into existence in 1976 following the breakup of the defunct NorthEastern State. Prior to this, the Borno Emirate had been in existence for several decades with an exclusive list of Shehus and Emirs who have superintended over the economic and Religious affairs of the Emirate with the most recent in this illustrious line being Emir Abubakar Ibn Umar Ganbari El-Kanemi.

The present Kanemi dynasty seized control of the Borno Emirate in the early parts of the 19th century following the succesful Jihad of Usman Dan Fodio. The Europeans invaded Borno in 1893 before the British colonial Masters officially added Borno to the Northernm Nigeria Protectorate in the year 1902.

Past governors/administrators of Borno state include 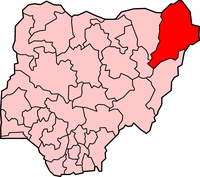 Find and explore some of the best businesses in Borno State.