Alhaji Kashim Shettima was born on 2nd September,1966 in Shettimari to the family of Alhaji Shettima Mustafa Kuttayibe in Maiduguri, Borno State.

He got admission to the University of Maiduguri for his first degree programme in 1983 and  obtained a Bachelor of Science (Honours) degree in Agric Economics, second Class Upper Division.

During his National Youth Service (NYSC), he worked with the Nigerian Agricultural Cooperative Bank in Calabar from 1989 to 1990, after which he  attended the University of Ibadan from 1990 to 1991, gaining a Masters Degree in Agricultural Economics.

After obtaining his Masters degree Shettima  worked briefly as a lecturer in the Department of Agricultural Economics, University of Maiduguri from 1991 to 1993.

He then worked with the Commercial Bank of Africa as an Agricultural Economist at its Ikeja Office, Lagos State (1993-1997). He became a Deputy Manager, later Manager, at the African International Bank Limited, Kaduna Branch (1997–2001), and was appointed Deputy Manager/Branch Head of the Zenith Bank's Maiduguri Office in 2001, becoming General Manager five years later.

In mid-2007, he was appointed Commissioner of the Borno State Ministry of Finance and Economic Development. Later, he became Commissioner in the Ministries of Local Governments and Chieftaincy Affairs, Education, Agriculture and later Health under his predecessor as Borno Governor Ali Modu Sheriff.

In the January 2011 ANPP primaries, Engineer Modu Fannami Gubio was selected as candidate for the governorship. However, Gubio was later shot dead by gunmen, and Shettima was selected in a second primary in February 2011, later winning the general elections on April 26, 2011.

After his first term as Borno State governor, he went on a re-election bid and got elected for a second term in April 2015.

Alhaji Shettima is a practicing Muslim and is married to Hajiya Nana Shettima. The marriage is blessed with children.

No reviews yet for Kashim Shettima 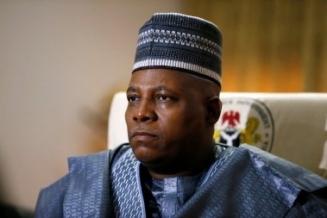