Peter Ayodele Fayose was born on 15th November, 1960, in Ibadan, Oyo State to Pastor Oluwafemi Oluwayose and Prophetess Victoria Olufunke Oluwayose. He is a native of Afao Ekiti in Irepodun/Ifelodun Local Government Area of Ekiti state.

Ayo Fayose began his early education at Saint Leo’s Catholic Primary School, Ibadan in 1966 and obtained his Primary School Leaving Certificate in 1972. He proceeded to the Olivet Baptist High School, Oyo in 1973 where he sat for and passed the School Certificate examination in 1979. He was admitted for a one year pre-National Diploma (Pre-ND) programme at the Federal Polytechnic, Ilaro, leading ultimately to a two-year Ordinary National Diploma (OND) programme in Science Laboratory Technology, which he successfully completed in 1984.

He underwent his one year mandatory industrial attachment at the Cocoa Research Institute of Nigeria (CRIN), Ibadan. He produced body and hair products during this period, naming them ‘Spotless’.

In 1985, Fayose was admitted for a Higher National Diploma (HND) programme in Biological Sciences/Applied Medical/Biology by the Polytechnic, Ibadan and graduated in 1987. He had his National youth service at Pepsi Nigeria Limited, Ibadan.

Fayose was the CEO of Spotless Investment Limited, a group of companies since 1988 until his election as the Governor of Ekiti State in 2003.

Before his election, Fayose served as Chairman of a Facts-Finding Committee set up then by the Peoples’ Democratic Party, and assigned to Kaduna State in 2003. He had served twice as national delegate to the PDP national convention.

Peter Ayodele Fayose was the PDP flag bearer in the 2003 Governorship election in Ekiti State, which he won and assumed office on May 29 that same year. He was however impeached in October, 2006.

Nonetheless he ran for the same post during the Ekiti June 21st 2014 elections against Kayode Fayemi. He won the election and has since been declared by the Independent National Electoral Commission as the Governor of Ekiti State. He was inaugurated on 16 Oct 2014.

Governor Fayose  is married to Her Excellency Mrs Feyisetan Fayose and the marriage is blessed with 5 handsome children, who are all boys. They are Joju, Rogba, Tomiwa, Nigba, and Boluwatife.

Fayose has received many laurels and awards such as

He is also an honourary Life Patron of the Coliseum Nite Shift Lagos and the Air Force Senior Officers Club. Port Harcourt.

No reviews yet for Ayo Fayose 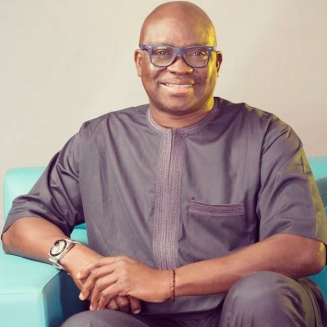