Willie Obiano is a native of Aguleri in Anambra East Local Government Area of Nigeria. He was born on August 8, 1957.

Willie Obiano’s earliest education was at the Holy Trinity Primary School Onitsha where had his primary education. For his secondary education, he attended Christ the King College, Onitsha, where he obtained his West African School Certificate. After this, he proceeded to the University of Lagos and obtained a B.Sc. Second Class Upper in Accounting in the year 1979 and an MBA in Marketing in the year 1993.

Willie Obiano was very outstanding while in school. In the year 1974 at C.K.C. Onitsha, he won the John F. Kennedy Award for Essay. During his National Youth Service, he was awarded a National Merit Certificate for outstanding service in Benue State and the Best Youth Corper Award.

Obiano worked at First Bank of Nigeria Plc as a Supervisor in 1981. He also worked with Texaco as the refineries and bunkering auditor and rapidly rose to the position of  Chief International Auditor of Texaco, before joining Fidelity Bank Plc in the1991.

At Fidelity Bank, he was a Deputy Manager and Head of Audit. Shortly after he joined the bank, he was elevated to the position of a manager. In 2003, he became an Executive Director, he was a General Manager before assuming the position.

In November 2013, Willie Obiano became the governor of Anambra State, having successfully contested for the position under the platform of the All Progressive Grand Alliance (APGA).

He was successfully re-elected in November 2017 on the platform of All Progressive Grand Alliance (APGA).

Chief Willie Obiano is married to her Excellency Ebelechukwu Obiano, the marriage is blessed with children.

One of the greatest qualities of Chief Willie Obiano is his philanthropic spirit and his willingness to help people in need. He is known to have secretly operated a Foundation that has offered scholarships to many people from Anambra North Senatorial district.

He is also a pillar of the church and has made extensive donations and contributions to diverse development projects in the Catholic Church, the Anglican Church and some Pentecostal churches across Nigeria.

No reviews yet for Willie Obiano 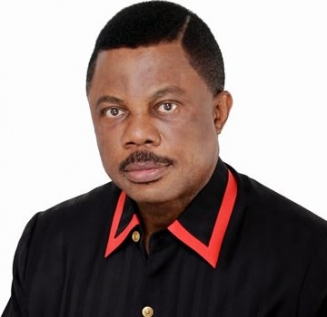