Yahaya Bello Adoza was born on June 18, 1975 in Agassa, Okene Local Government Area of Kogi State to the family of Alhaji Bello Ipemida Ochi and Hajia Hawa Bello Oziohu. He is an indigene of Kogi State and the last born of six children.

Bello proceeded for his ‘A’ level exams in Kaduna State Polytechnic, Zaria in 1995 and gained admission into Ahmadu Bello University(ABU) Zaria in 1996 to study Accountancy. He graduated with a degree in Accountancy in 1999.

Yahaya obtained his Masters in Business Administration(MBA) in 2004 still from ABU, Zaria. He is also a chartered fellow of Association of National Accountants of Nigeria(ANAN).

He spent his NYSC year at the Revenue Mobilization Allocation and Fiscal Commission (RMAFC) in 2002 and was retained. He was subsequently appointed as Revenue Officer and then promoted to Accountant within a short period. He later attained the post of Assistant Chief Accountant before leaving the commission.

Over time, Alhaji Yahaya Bello mastered the art of stock trading and had a financial breakthrough right before the crash of the stock market. His stock portfolio investments cut across oil and gas, finance, transportation, and agro related sectors. He then grew and expanded his real estate investments expanding into a number of states in the country.

He is the managing director of FairPlus International Limited and the chairman of Kogi Youth Arise Forum.

He began his political journey by joining other progressive young men and women to form Kogi Youth Arise Group. The group threw its weight behind the candidature of Buhari/Osinbajo in the last presidential election. The group was also responsible for mobilizing youths across the 239 wards in the State in support of President Buhari.

With the teeming support from youths across the state for one of their own to lead Kogi into a brighter future, he presented himself to vie for the position of Governor in the gubernatorial election of 2015 on the platform of the All Progressives Congress (APC).

On December 6, 2015, Yahaya Bello was declared winner of the Kogi State gubernatorial elections, after replacing former APC candidate, Abubakar Audu, who died on November, 22, when the election was declared inconclusive.

Governor Bello is a practicing Muslim and is married to three wives. He is blessed with many children.

His hobbies include reading, traveling, driving, soccer and boxing.

No reviews yet for Yahaya Bello 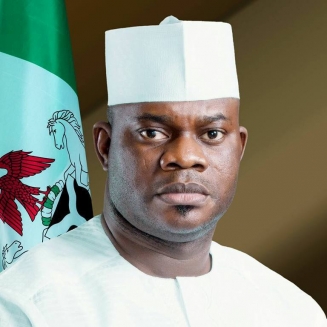