Delta state is home to several indigenous dishes with the most popular being the Banga soup which is made primarily from oil palm nuts.

The Governor of Delta State is Ifeanyi Okowa.

Big Heart of the Nation

Delta state has a total area measuring  16, 842 km squared with several clusters of water bodies. 60 percent of the state's total area is land while the remaining 40 percent comprises of water. The state's topography is largely low-lying with an absence of hills and elevations and has several rivers, streams and tributaries.

There are two seasons in Delta state, the dry season and the rainy season with the average precipitation being around 4000 mm per annum and th average annual temperature being 26 degrees centigrade.

Delta state is rich in crude oil and natural gas reserves and this is a major source of resource accrual to the state. Delta state is also home to the Warri refinery as well as having the presence of several local and multinational oil and gas companies.Trade is also an important economic activity in Delta state with the state hosting several markets such as the Abavo, Agbado, Edaiken Uselu, Ekeosa market, Eyaen cattle market, Kara, Eki osa market, Oliha, Oka, Uselu, Vegetable market, Efferun market Effurun, Ogbagonogo market Asaba, and the cable market Asaba.

Also, inhabitants of Delta state engage in fishing and Agriculture on both the subsistence and commercial levels as means of livelihood. The town of Asaba is also largely popular for its trading activities owing largely to its close proximity to the ultra commercial town of Onitsha. Asaba is also a hub for movie acting and production as a great number of Nollywood movies are shot and produced there.

Delta state was created in 1991 from the old Bendel State under the Gen Ibrahim Babangida administration. Brigadier Chijiuba Ochulor was the pioneer administrator of the state and he ruled from August 1991 to January 1992. Past Governors of Delta state include 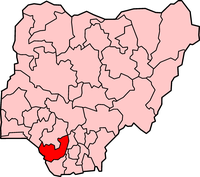 Find and explore some of the best businesses in Delta State.