Alhaji Abdullahi Umar Ganduje is the current governor of Kano state. He was born in Ganduje village of Dawakin Tofa Local Government Area of Kano State on December 25, 1949, to the royal family of Alhaji Umar Shi’aibu.

He started his early education in Qur'anic and Islamiyya school at his village Ganduje, where he became trained in Islamic knowledge. He later went to Dawakin Tofa Primary School from 1956 to 1963 to obtain western education. After his primary education, Ganduje went to Government Secondary School Birnin Kudu and completed his secondary education in 1968.

He obtained Nigerian Certificate of Education (NCE) from Advanced Teachers' College Kano between 1969 and 1972, after which he proceeded to the Ahmadu Bello University, Zaria and came out with a Bachelor of Science in Education degree in 1975.

Ganduje’s adventure in politics started when he joined the now defunct National Party of Nigeria (NPN) during the Second Nigerian Republic and served as Kano State Assistant Secretary from 1979 to 1980.

He contested the House of Representatives election in 1979 under the NPN but lost.

Ganduje joined the People's Democratic Party (PDP) and in 1999 contested in the party's  gubernatorial candidacy primaries but lost to Rabiu Musa Kwankwaso. He was later picked as the deputy to Governor Rabiu Kwankwaso and they went ahead to win the election which kept them in power from 1999 to 2003.

In addition to his deputy governorship role, he doubled as the Commissioner for Local Government.

During the 2003 general elections he and Kwankwaso could not replicate their earlier success and were defeated by Ibrahim Shekarau who then became the Governor of the state. They will eventually win it back in 2011 on the platform of PDP.

From 2003 to 2007 Ganduje served as the special Adviser (Political) to the Hon. Minister of Defence, Federal Republic of Nigeria and also served as a member of the Nigerian Civil Aviation Authority (NCAA).

Ganduje was appointed chairman of the Federal Polytechnic, Ado-Ekiti in 2008 and was later appointed the executive secretary of the Lake Chad Basin Commission at Ndjamena, Republic of Chad. He participated in the 2006 Nigerian Political Reforms Conference.

Following his stint as deputy governor for two tenures,he was selected as the consensus candidate to succeed Kwankwaso as Governor of Kano State in the 2014 on the platform of the All Progressive Congress (APC)  which they had defected to.

He went on to win the Kano state gubernatorial elections in 2015 to become the governor.

Alhaji Ganduje is a practicing Muslim. He is married to Dr Hasfat Umar Ganduje

He consented to the marriage of his daughter Fatimah Umaru Ganduje to Idris Ajimobi, the only son of governor Abiola Ajimobi of Oyo State in November 2017.

Ganduje was conferred the National Honour of the Officer of the Federal Republic (OFR) in September 2012 by President Goodluck Jonathan.

He was also inducted as a Fellow National Association of Educational Administration and Planning (FNAEAP) in October 2016 at Bayero University Kano.

No reviews yet for Abdullahi Umar Ganduje 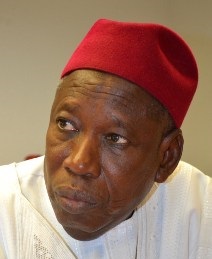