Augustine Azuka Okocha known as Jay-Jay Okocha was born August 14th, 1973 in Enugu, Enugu State, Nigeria. His parents were from Ogwashi-Uku, Aniocha South Local Government Area of, Delta State. He is a Nigerian former professional footballer who played as an attacking midfielder for the national team and various clubs in England, France, Germany and Turkey. A quick and skillful playmaker, he is widely regarded as the best Nigerian player of his generation and one of the greatest African players of all time.

The nickname Jay-Jay was passed down from his elder brother James, who started playing football first. His immediate older brother, Emmanuel, was also called Emma Jay-Jay. The name has however garned prominence with Austin Jay-Jay. Just like many other footballers, Jay Jay began playing football on the streets, mainly with balls cobbled-together. He revealed in an interview that they played football with just about anything they could get a hold of

In 1990, Jay Jay joined Enugu Rangers where he made many spectacular displays including one where he rounded off and scored a goal against the experienced Nigerian goalkeeper, William Okpara, in a match against BCC Lions. A few months later, he visited West Germany to watch a German league football game. While in Germany, he stayed with his friend Binebi Numa who was playing in the Third Division for Borussia Neunkirchen. On one of Numa’s training days, Okocha tagged along and was asked to join in the training. His skills attracted the attention of Neunkirchen coach who told him to join the next day before offering him a contract.

The revered player then enjoyed a meteoric rise from being an amateur footballer to an international player and tormented defences with his range of tricks.A year later, he joined FC Saarbrücken, playing only for a short-time with the Bundesliga side before a transfer to Eintracht Frankfurt. The ex-player continued to sparkle in the German side, one notable highlight being a goal he scored against Karlsruhe, taking the ball forward in the penalty box past goalkeeper Oliver Kahn even going past some players twice.The goal was voted Goal of the Season by many soccer magazines, and also voted as 1993 Goal of the Year by viewers of Sportschau (an ARD German TV sports program). In 1995, Okocha, Yeboah and Maurizio Gaudino had a serious argument with manager Jupp Heynckes, which forced them to leave the club.The two moved to England, while Okocha stayed until the end of the season which saw Frankfurt relegated to the lower Bundesliga. He thereafter transferred to Istanbul club, Fenerbahçe. In his two seasons with the team, he scored 30 goals in 62 appearances of which vast majority came from direct free kicks, which made him standout in the club. While at Fenerbahçe, he also became a Turkish citizen as “Muhammet Yavuz”.

In 1998, French side Paris Saint-Germain spent around £14 million on Jay Jay, making him the most expensive African player at the time. During his four-year stint with PSG, he played 84 matches and scored 12 goals. He has also served as a mentor, at the time, for young Brazilian footballer Ronaldinho during his time in Paris. In the summer of 2002, he joined Bolton Wanderers from PSG. His debut season, despite being hampered by injury, made him a favourite with the Bolton fans. Till date, Jay Jay Okocha remains a hero to Bolton Wanderers, where the Nigerian rescued the club from relegation with a series of glorious goals and mesmerizing performances. He won club player of the year in 2005.

Scorer of some of the greatest ever Nigerian goals in 1990s, Okocha also won the Africa Cup of Nations with Nigeria in 1994 and played in the World Cup the same year. The sublime talent who spent a large part of his career at Nigeria’s national team, winning 74 caps for Nigeria after making his debut in 1993, was part of Nigeria’s 1996 Olympic gold medal-winning side and was in the 1994, 1998 and 2002 World Cup squads.

He played one season for Qatar, Football League Championship side before he was signed by Hull City on a free transfer in 2007, after the player had been linked to Real Salt Lake and Sydney FC. He retired from international football after Nigeria lost to Ivory Coast in this year’s African Cup of Nations semifinals.

In 1997, Jay Jay got married to Nkechi Okocha, and the two have two children; Daniella Okocha (daughter) and A-Jay Okocha (son). His older brother Emmanuel was also a former international for the Nigerian team. Okocha is from Anioma, a subgroup of Igbo ethnic derivative. His nephew is international footballer Alex Iwobi who plays for English club, Arsenal FC.

Okocha never won the African Player of Year award, becoming arguably the best player never to win the award despite coming second twice in 1998. He did however win the inaugural BBC African Footballer of the Year and the successive one, becoming the only player to retain the award and win it more than once. In 2004, he was listed in football legend Pelé's FIFA 100 (a list of the greatest 125 living players of all time). In 2007, he was voted number 12 on the greatest African footballers of the past 50 years list, on a poll conducted by CAF to coincide with their 50th anniversary. A number of the numeous awards he has receivd include:

No reviews yet for Jay-Jay Okocha 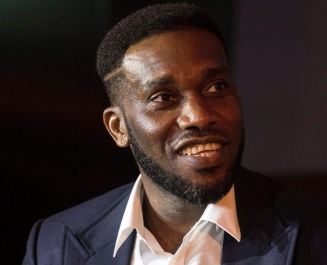