Victor Nsofor Obinna was born on March 25th, 1987 in Jos, Plateau State, Nigeria. He is an Igbo from the South Eastern part of the country. His name, Obinna, literally means "father's heart". He is a footballer who plays in the striking position for the Super Eagles of Nigeria.

Obinna played for Nigerian clubs Plateau United and Kwara United, he went on trials with Italian clubs Internazionale, Perugia and Juventus before signing with Brazilian club Internacional, but international clearance problems meant that the transfer was never finalised. He rejoined Enyimba in 2005 and took part in the club's domestic league campaign and CAF Champions League defence.

Obinna was signed by Italian club Chievo on a five-year contract in July 2005, but also reported that Chievo formed an agreement with Internazionale that he first registered as Chievo player in order to use the non-EU registration quota of Chievo, like Júlio César in the 2004–05 season.

In his first season with Chievo, Obinna scored six goals in 26 games, including a goal on his Serie A debut against Parma in a 1–0 win, 11 September 2005. In the first months of the 2006 season, Obinna was suspended for having signed a contract with both Internacional and Chievo in 2005. Chievo were relegated at the end of the 2006–07 season, casting some doubt over Obinna's future; the club choosing to keep Obinna in the squad to help gain promotion back to Serie A.

On 4 October 2007, Obinna was involved in a car accident on his way home from training in which he swerved away from a vehicle that had tried to overtake him around a bend. He escaped with only a few cuts and bruises. The car flipped several times and was heavily damaged. He lost consciousness and was taken to hospital. The accident occurred only a few hundred yards away from where former Chievo player Jason Mayélé was killed in a car accident in 2002.

In the summer of 2008, Obinna moved back to Inter for a €1.2 million transfer fee in a three-year contract. English club Everton attempted to immediately sign him on loan, but were unable to secure a work permit for the player. Obinna's first goal for Inter came on 19 October in a 4–0 win over Roma. Internazionale coach José Mourinho described Obinna as one of Inter's best talents for the future.

On 26 August 2009, Spanish La Liga side Málaga signed Obinna on a season-long loan. He scored his first goal for the Andalusian club on 4 October in 1–1 a draw against Xerez, a match in which he was also sent off. On 27 August 2010, Obinna signed for West Ham United on a season-long loan with the option of a permanent deal in 2011. He made his debut for West Ham on 11 September in a 3–1 home defeat to Chelsea. He scored his first goal for West Ham in a 2–1 win against Sunderland in the third round of the League Cup at the Stadium of Light on 21 September 2010. He scored his first league goal in 3–1 win against Wigan Athletic on 27 November 2010. He continued the fine form with four assists in a 4–0 win against Manchester United on 30 November 2010, automatically booking a first League Cup semi-final for 20 years.

He was sent off during West Ham's semi-final, first leg match on 11 January 2011 against Birmingham City for an off the ball challenge on Sebastian Larsson with West Ham having conceded an equaliser just minutes earlier. On 30 January, Obinna scored a hat-trick in a FA Cup 4th round tie against Nottingham Forest, leading West Ham to a 3–2 victory. He followed that up three days later with two goals as West Ham beat Blackpool 3–1 at Bloomfield Road.

In September 2017, Obinna signed for Premier Soccer League side Cape Town City on a one-year-deal.. At the time of signing, the club was managed by former West Ham teammate Benni McCarthy. McCarthy described Obinna as his friend who he supported in the early days of his career. “I came across him at West Ham where we played together. He was a bit youngish, I took him under my wing as I was on the way out. We became friends and always just kept in touch all these years," McCarthy recalled. Obinna however left Cape Town City after just six months because according to him, he could not settle in the country. He  scored only one goal in 14 appearances for the South African team.

No reviews yet for Victor Obinna 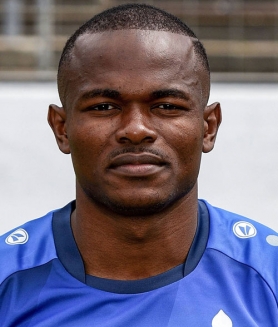