Amokachi grew up in Kaduna, attending primary and secondary schools in the city. He joined the youth team of Kaduna based Ranchers Bees FC as a teenager.

Amokachi aka "The Bull" came to national limelight in 1988 when he broke into the first team at Ranchers Bees FC of Kaduna in the second half of the 1988 Nigeria Division One League Football season. The exploits of this new exciting talent, called Amokachi, continued into the 1989 football season and soon caught the attention of the national team handlers. While Nigerians were expecting the then 16 year old Amokachi to be selected for the Golden Eaglets side preparing for 1989 U-17 World Cup in Scotland, national team coach Clemens Westerhof had other ideas and Amokachi was invited to the senior team B side which went on to win the ECOWAS Cup in Bauchi in December 1989.

Due to the pay dispute that existed in early 1990 between foreign based players and the Nigerian Football Association (NFA), Clemens Westerhof decided to take the bulk of his ECOWAS Cup winning side to the African Cup of Nations in Algiers in March 1990. The then 17 year old Amokachi made his debut in the premier African football competition and played a key part in Nigeria placing second at the competition, having lost the finals 1-0 to host Algeria.

Amokachi's performance in Algiers meant it was only a matter of time before he left the domestic scene and in July 1990 he signed for Belgian side Club Brugge KV. His game developed in Belgium and he would go on to score 35 goals in 81 appearances before leaving in August 1994. During his time in Brugge, he won the "Best African Player in Belgium" award for two (2) seasons and went into the history books by scoring the first goal in the new UEFA Champions League with his goal against CSKA Moscow in a 1-0 victory on 25th November 1992.

Just as his club career was growing in leaps and bounds, so also was his national team stature. Amokachi was an integral part of the successful Super Eagles side of the 90s, helping Nigeria to third place at the 1992 African Cup of Nations in Senegal, securing Nigeria's qualification for the USA 94 World Cup in October 1993 and winning the 1994 African Cup of Nations in Tunisia in April 1994.

At the 1994 World Cup in USA, hard-working Amokachi, whose power play style of football had earned him the nickname the "The Bull", announced himself on the world stage. His goals against Bulgaria and Greece in the group stages, helped Nigeria progress to the second round where the Super Eagles narrowly lost to Italy 2-1 after extra time.

After the World Cup, it was no surprise when Amokachi sealed a £3m move from Club Brugge to English Premiership side Everton. Amokachi, known to the Evanton fans as "Amo Taxi" due to his bustling style of play, won the prestigious FA Cup in 1995. He also earned a place in Evanton's folklore when he came on as a substitute (against the manager's order) in the FA Cup semi-final against Tottenham Hotspurs and scored 2 goals in a 4-1 victory. Following a change of Managers at Everton, Amokachi found playing time limited and not one to sit around, he left Evanton in June 1996. In his 2 seasons with Evanton, he scored 10 goals in 43 appearances.

In July 1996, Amokachi signed for Turkish side, Besiktas before joining up with the Nigerian U-23 side (known as Dream Team) as one of the 3 overage players, along with Emmanuel Amunike and Uche Okechukwu, at the 1996 Atlanta Olympic Games. Amokachi played all 6 matches as Nigeria went on to win Africa's first Olympic gold in football with a 3-2 victory against Argentina in the final match with Amokachi scoring the second goal.

Just before the 1998 World Cup in France, Amokachi sustained a knee injury that would ultimately end his football career. Despite his knee injury, Amokachi made the Nigerian team to the 1998 World Cup but could only play 67 minutes in the 1-0 victory over Bulgaria. His national team career saw him score 14 goals in 42 appearances.

Planned moves to 1860 Munich in Germany and Tranmere Rovers in England fell through due to failed medical tests. He had stints with US Créteil-Lusitanos in France (2000/2001), Colorado Rapids in the US (2002) and Emirate Club in UAE (2002/2003) before finally retiring from professional football.

The 41-year-old Kaduna born football star Daniel Amokachi is married to Nadia who he met in Tunisia where he won the African Nations Cup, over two decades ago. They have a set of twin sons named; Kalim and Nazim. Both kids are following their father's footsteps in becoming footballers and are currently in the Besiktas youth academy.

During his successful career, Amokachi won numerous individual awards including a 1995 and 1996 back-to-back African Footballer of the Year award, after a third position in 1994. Before then in 1989, he won the best young footballer award at the West African Club Championship. In 1992 and 1994, he won the Belgian Ebony Shoes Award. He won the International Honorary Award of Sportsmen of Turkey in 2015, and was listed as the 18th player in Africa for the 20th century by the International Federation of Football History and Statistics.

As assistant coach to Stephen Keshi at the 2013 AFCON, Amokachi was conferred with Officer of the Order of the Niger, OON, award for the team's victory by former President, Goodluck Jonathan.

No reviews yet for Daniel Amokachi 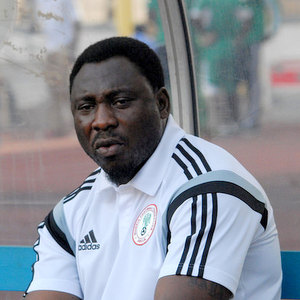