Celestine Boyd Jonto Hycieth Babayaro was born on August 29th, 1978 in Kaduna, Nigeria. His father, Mr. Iroka, a former IT employee, was from Amaigbo in Nkwerre Local Government Area, while his mother, Mrs. Esther Iroka, was from  Amanato in Ideator Local Government Area, both in Imo State. The name Babayaro came about because he adopted as a trade name, the name of their coach/chairman Alhaji Sabo Babayaro of Jama'a Road Kaduna. Celestine Babayaro is a Nigerian former footballer who played as a defender or as a midfielder.

Babayaro grew up in Kaduna with his family including hs brother, Emmanuel, who also went on to be a professional footballer and current club chairman of Kaduna United. During their early years, he was instrumental in converting his brother from a central midfielder to a goalkeeper.

Babayaro began his playing career at Nigerian side Plateau United, before moving to Belgian club Anderlecht in 1994, and eventually would make a name for himself, quickly gaining first-choice status although still a teenager. Babayaro set records as the youngest player to make an appearance and to receive a red card in the UEFA Champions League. He was sent off in a match between Steaua Bucuresti and his club Anderlecht (1–1), aged 16 years and 86 days. Celestine is widely regarded as the best Nigerian full back ever to have lived alongside Taribo West.

Babayaro was signed by Chelsea after being spotted by scout Lewis Durkin in April 1997. He moved for a transfer fee of £2.25 million, a club record paid for a teenager at the time. He made his debut in the UEFA Cup Winners' Cup against Slovan Bratislava, but an injury sustained in the 6–1 win over rivals Tottenham Hotspur in December 1997 ruled him out for the rest of the season. This meant he missed their victories in the 1998 Football League Cup Final and the 1998 UEFA Cup Winners' Cup Final. However, with Chelsea he went on to win the 1998 UEFA Super Cup, the FA Cup and Charity Shield in 2000, and reached the 2002 FA Cup Final. He was also instrumental in Chelsea's memorable run in the 1999-2000 UEFA Champions League. However it was to end in heartbreak for Babayaro as he was sent off in extra time against Barcelona as they bowed out of the competition at the quarter final stage. He faced competition from Graeme Le Saux during his seven-year spell, but managed to play over 200 games for the London side. His acrobatic celebrations with backflips were noted and loved by the fans of the club. The steady form of Wayne Bridge saw Babayaro start only four FA Premier League matches for Chelsea in 2004–05 under new manager José Mourinho. Chelsea ended the season as Premier League champions.

In January 2005, he left Chelsea to join Newcastle United on an undisclosed fee, where he established himself as first choice left back. He scored his first and what turned out to be his only Newcastle goal in a 3–1 win over Coventry City in the FA Cup.  Due to his many injury problems it was mutually decided, on 10 December 2007, that Babayaro should be released from his contract with immediate effect and a compensation figure was agreed. In January 2009, former Newcastle United chairman Freddy Shepherd described Babayaro as a "disgrace" who "didn't pull his weight" during a televised BBC interview. On 21 January 2008, 29-year-old Babayaro came to an agreement with the Los Angeles Galaxy to join them on a three-year contract, effective immediately.

After being part of the victorious Nigerian team at the Under-17 World Championships in Japan (1993), Babayaro made his international senior debut in the Afro-Asian Championship in 1995, against Uzbekistan. The following year he was part of the Nigeria Olympic gold medal winning team at the Atlanta 96 football event, making the tournament's all-star team. He scored in the Gold Medal game itself against Argentina. After getting a knee injury in December 1997 in the Premier League, Babayaro recovered just in time to make the France 98 squad. He was also Nigeria's captain at the 2000 Summer Olympics in Sydney, and took part in the Korea/Japan 2002 FIFA World Cup. He was part of Nigeria's squad for the 2004 African Nations Cup in Tunisia, but was controversially sent home, alongside Yakubu Aiyegbeni and Victor Agali for indiscipline. Although never officially announcing his retirement from international football, he has not played for the national team ever since. On 8 July 2010, Babayaro officially announced his retirement from football.

A Roman Catholic, Babayaro was named after Pope Celestine V. He has been in relationships with Cassie Sumner (2004 - 2005) and Alicia Douvall(2002). According to reports, he is possibly single. He has a son, Ryan Hyacinth, who trains at the Newcastle football academy. In July 2017, the 11-year-old emerged the Most Valuable Player in a small sided football competition organized by Newcastle United's 1892 Foundation for schools at the Tyneside.

Babayaro was acquitted of indecent assault in 1999. He later sued the Daily Star for a headline suggesting he had been charged with rape and won an apology and damages. He was declared bankrupt in 2011. On July 31. 2016, he lost his mother, Esther Iroka, after a brief illness.

Babayaro was twice awarded the Belgian Young Professional Footballer of the Year in 1995 and 1996.

No reviews yet for Celestine Babayaro 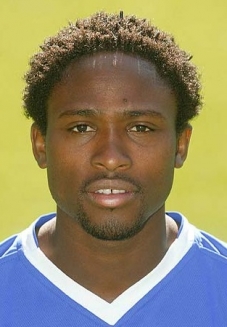