Ojo Ekundayo Solomon was born on October 10th, 1994. He is a professional Nigeria footballer who currently plays as a striker for Nigerian Premier League club Sunshine Stars F.C.

Ojo began as a youth player for academy side, Karamone.

Ojo began his professional league career with Rising Stars F.C. in 2008. In 2010, he was transferred to Sunshine Stars F.C., where he played till 2016 December when he joined Sudanese side, Al-Merrikh SC. Although he signed a four-year deal with Al-Merrikh SC, he returned to Sunshine few months later after an unsuccessful stint at the club.

Ojo was member of the Nigeria U-17 2010. He was part of 2010/11 Nigeria U-17 national team and presently part of the Nigeria Super Eagles A international team. Ojo was a member of Sunshine Stars team that got to the Semi Finals of the CAF Confederations Cup in 2011 and the CAF Champions League in 2012. Ojo was a member of the Nigeria Professional Football League All Star Team that visited Spain in August 2016 to feature in tournaments and friendlies against Valencia, Malaga and Atletico Madrid. He made his international debut for Nigeria in 2018 at the African Nations Championship where the team finished as runners-up to host Morocco.

Ojo was named man of the match following his superb display in the Nigeria’s 3-1 win against Equatorial Guinea at the 2018 CHAN tournament.

No reviews yet for Dayo Ojo 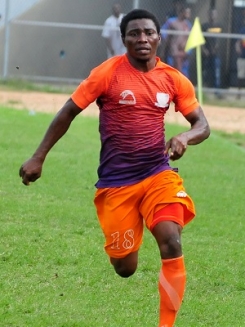