Ayodele Adeleye is a Nigerian professional footballer who was born in Lagos, Nigeria, on December 25th, 1988. The central defender has travelled across continents, featuring for clubs in Nigeriam Netherlands, Ukraine, Greece and Kazakhstan.  He currently wears the badges of Russian Premier League club FC SKA-Khabarovsk. Adeleye has an imposing height and carriage that scares off attackers. He also has a way of holding on to his mark without giving them space to play.

Born in the city of Lagos where h spt his early life, he is an indigene of Ogun State. While in secondary school, he joined ex-international Taribo West’s defunct football academy, Tamuno Inaemi Nationale, where his skills were harnessed.

After graduating from Tamuno Inaemi Nationale, Adeleye joined Shooting Stars FC of Ibadan in 2005 before playing for Sunshine Stars of Akure. He signed for Sparta Rotterdam of Netherlands in 2007. However, Rottrdam were relegated to the lower division of Dutch football in 2010 causing the club to release a host of players including Adeleye.  He joined FC Tavria, September 2011 and had short spells at FC Kuban Krasnodar, Anzhi Makhachkala, Ergotelis and OFI Crete before signing a two year contract with FC Aktobe of Kazakhstan. He assisted Aktobe finish third on the log in his debut season, scoring a single goal in 29 appearances.

In February 2018, the former Super Eagles defender joined Russian Premier League club FC SKA-Khabarovsk. He was without a club since he was declared surplus to requirements by Atkobe at the end of the  2015/2016 season.

Adeleye was capped 10 times by Nigeria and was a member of the country’s U-20 and U-23 sides that came second at the FIFA U-20 World Cup in the Netherlands in 2005 and the football event of the Beijing 2008 Olympic Games respectively.

Adeleye is currently singl and there are no reports of him dating anyone at the moment.

No reviews yet for Dele Adeleye 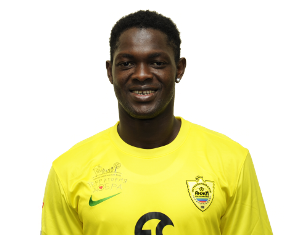