Atiku Abubakar was born on November 25th, 1946 to a Fulani trader and farmer Garba Abubakar, and his second wife, Aisha Kande, in Jada village of Adamawa State. His grandfather was originally from Wurno in Sokoto State. There, he had met and befriended Ardo Usman, a Fulani nobleman from what is now known as Adamawa State. His grandfather decided to accompany his new friend back to his home- town of Adamawa. They settled in Kojoli, a small village in Jada Local Government Council of Adamawa State, where his grandfather farmed, kept livestock and raised a family. He married a local girl in Kojoli and gave birth to Atiku's father, who was their only child.

Atiku was named after his paternal grandfather, Atiku Abdulkadir, a common practice among the Fulani people to name their first sons after their paternal grandfathers. His father was an itinerant trader who traveled from one market to another selling imitation jewelry, caps, needles, potash, kola nuts and other nick-knacks which he ferried around on the back of his donkey. He also kept some livestock and cultivated guinea corn, maize and groundnuts.

Atiku became the only child of his parents when his only sister died at infancy. As a young boy growing up in Kojoli, his parents doted on me. They tried their best to provide for him and to ensure that he grew up in a wholesome environment of love and spirituality.

Although Atiku wanted to go to school, his father wanted him to become an Islamic scholar, herdsman, farmer and trader – just like him. He was a deeply religious man who was suspicious of Western education which he believed could corrupt the impressionable minds of young people. His father regualary tried to hide him from the prying eyes of Native Authority officials who had embarked on compulsory mass literacy campaign in the region, but soon discovered that he could not resist the wind of change that was blowing through the area at the time.

Consequently, Atiku got registered into Jada Primary School at the age of eight. Three years after he started school, tragedy struck in December 1957 when his father drowned while trying to cross a small river known as Mayo Choncha on the outskirts of Toungo, a neighbouring town. The river was in high tide following a heavy rainfall. Father’s body was recovered the following day and buried in Toungo according to Islamic rites. He was less than 40 years old when he died. Years later, Atiku built an Islamic primary school at his burial site to immortalize him.

After completing his primary school in Jada in 1960, he was admitted into Adamawa Provincial Secondary School in Yola, where he joined 59 other young boys from Adamawa and beyond in January 1961 to begin a five-year high school journey. He later finished his Secondary school in 1965 after he made Grade Three in West African School Certificate Examination. He then proceeded to Nigerian Police College, Kaduna. He left the college for a work as Tax Officer in the Regional Ministry of Finance. Later he got admission to study at the School of Hygiene Kano in 1966. In 1967, he graduated with a Diploma. That same year, he was admitted for a Law Diploma at Ahmadu Bello University on a scholarship. He graduated in 1969 and got employed in the Nigerian Custom Service that same year.

Before completing his Diploma in Law programme in June 1969, a team from the Federal Civil Service Commission came on a recruitment drive to the university, and Atiku got employed by the Department of Customs and Excise. After running a training at the Police College in Ikeja, Lagos and at the Customs Training School in Ebute Metta in Lagos, he was posted to Idi Iroko border station. In 1972, he was posted to Ikeja Airport in Lagos and later to the Apapa ports. He was posted to Ibadan mid 1975 and promoted Superintendent of Customs.

Later he moved to the North and served in the Kano Command in 1976, then to Maiduguri ( as Area Comptroller) in  1977, from there to Kaduna in 1980 and back to the Apapa Ports in 1982. In 1987 Atiku was promoted to the post of a Deputy Director in charge of Enforcement and Drugs. In April 1989, aged 43, Atiku voluntarily retired from Customs.

Atiku went into private business after his retirement, with interests in oil Services, agriculture, food and beverages, print media, insurance, pharmaceuticals, and education. His reported philanthropic activities have included building of schools and mosques across the country, sponsorship of local and foreign treatment of citizens with aggravated medical problems, as well as local/oversea scholarships to disadvantaged Nigerian students. He has a reputation for his philanthropic activities, which include building hundreds of schools and mosques all over the country; sponsorship of local and foreign treatment of prominent and ordinary citizens with medical problems beyond their means; awarding local and overseas scholarships to hundreds of Nigerians; as well as employing thousands of Nigerians through his businesses.

Atiku joined politics in the arly 1990s and in 1991 contested the Gubernatorial position in then Gongola State (Now Adamawa and Taraba States) but still remained a close associate of  Shehu Umaru Yaradua (Late). In 1993 he contested for President under the platform of the Social Democratic Party(SDP), but lost to Chief M.K.O Abiola (Late) who was the flagbearer for the party in the annulled June 12th, 1993 elections.

Atiku emerged the key driver of the Peoples Democratic Movement that joined other political movements to form the Peoples Democratic Party in 1998.  He contested and won the Gubernatorial elections in Adamawa State, but was tapped to serve under President Olusegun Obasanjo as the Vice-President of the Federal Republic of Nigeria.  As Vice-President he was the Chairman of the National Council of Privatization and played an instrumental role in the Privatization process of the Telecommunications Industry, which has been described as one of the best economic decisions of the Obasanjo administration. With his wealth of knowledge and understanding of business, Atiku carried out other pro-business reforms of the  Obasanjo administration, which saw Nigeria’s economy experiencing a turnaround attracting key investments from the western nations.

He came to limelight when it was widely reported of his refusal to endorse a much talked about third-term ambition of President Olusegun Obasanjo in between 2005 and 2006. Nigerians commended him for his firm stand despite all his travails towards the tail end of his tenure. In 2006 Alhaji Atiku Abubakar joined the Action Congress to mobilize efforts to contest elections against the Peoples Democratic Party, but he returned back to the PDP in 2009.

When things did not go the way he planned and desired, the former Vice-President joined the All Progressives Congress in 2013, where he contested and lost the Presidential primaries in 2014 to President Muhammadu Buhari. Atiku supported Buhari as the APC defeated the former President Goodluck Jonathan’s PDP government in the 2015 general elections, and delivered Adamawa State during the polls.

The former Vice-President has business interests like Intels (Maritime and Oil servicing) and Adama Beverages Limited. Despite the narrative and allegations that he is a corrupt politician and businessman, there has been no proof or criminal conviction from a court of competent jurisprudence in the country. He is also the founder of one of the best private Universities in Nigeria, the American University of Nigeria in Yola, Adamawa State which is raising world-class leaders.

In 2017, After assessing the situation in the All Progressives Congress party Atiku defected and returned back to the PDP, citing the failure of the former to give hope and provide opportunities to Nigerians. His political ambition to be President is very much intact and he believes he has what it takes to lead the PDP, to victory in 2019 general elections if he emerges the Presidential candidate.

Atiku has been married four times and has 26 children. In 1969 he met his first wife, then 19 year old Titilayo Albert at Idi Iroko border post, where he was posted after joining the Department of Customs and Excise. They married in 1971. On October 26th, 1972, Titi gave birth to her first child, named Fatima. On April 11th, 1974, she gave birth to their first son and second child, named Adamu and Aminu.

On January 27th, 1979, Atiku took a second wife, Ladi, in Kano, to which he had come after stints at Lagos airport and seaport and Ibadan. Saadatu Ladi Yakubu was the daughter of a Police Officer from Gombe, then attending advance teachers college, Gumel. Together they have six kids: Abba, Atiku, Zainab, Ummi-Hauwa, Mary am and Rukayatu. They separated later (creating a vacancy for Atiku to marry a fourth wife, the maximum allowed a Muslim).

Atiku married his third wife, Fatima in 1983. An indigene of Maiduguri, she bore him Bilkisu, Meena, Shehu, Ahmed, Mohammed, Atiku Jr., Hafsat, Aisha, and Zainab. Fatima studied to be a lawyer in law school. Atiku also got married to the daughter of the late Lamido of Adamawa, Princess Ruqayyat. The formal turbanning and investiture to his chiefly office took place on the 19th of November, 1982, in a lavish ceremony in Yola. The formal solemnization was to wait till 1993 when she finished school and set up home in her father's kingdom. She would later take a degree from the University of Maiduguri, and bear Aisha, Hadiza, Aliyu, Asmau, Mustapha, Laila and Abdulsalaam for her husband.

Atiku was offered the title of the Turaki of Adamawa by Adamawa's traditional king, Alhaji Aliyu Mustafa, in 1979. The title had previously been reserved for the favourite prince in the palace, as the holder is in charge of the monarch's domestic affairs. In June 2017, he was awarded the chieftaincy title of the Waziri of Adamawa, and his previous title of Turaki was transferred to his son, Aliyu.

As a former vice president of Nigeria, he holds the award of the Grand Commander of the Order of the Niger (GCON).

No reviews yet for Atiku Abubakar 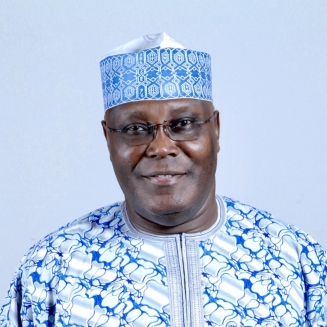