Foluwashola Ameobi (known as Shola Ameobi) was born on October 12th, 1981 in Zaria, Kaduna State, Nigeria. He is the first of six children (three boys and three girls). His father, Dr. John Ameobi is a Minister at the Newcastle Apostolic Church in the Spital Tongues area of the city, while his mother, Margaret Ameobi, is a nurse who works at Newcastle’s Royal Victoria Infirmary and Freeman Hospitals. Ameobi is a professional footballer  who plays as a striker for English club Notts County.

Although born in Zaria, Ameobi hails from Ijumu Local Government Area of Kogi State. He moved together with his family to moved to Fenham, Newcastle upon Tyne, England when he was age five. Together with his siblings - Sammy, Tomi, Toluwalola, Ifeniola and,Titi, he has since made Newcastle his home. His initial promise was spotted whilst attending the Walker Central Boys Club, before he was invited to attend Newcastle United's Academy in 1995.

Ameobi signed a pre-contract with Newcastle on 1 July 1997. He progressed through the youth setup, making his debut in the reserves in 1998 on 11 October against Sunderland. He made his first team debut two years later, 9 September 2000, in a home game against Chelsea. He went on to make 22 appearances for Newcastle that season.  The 2002–03 Champions League saw some of Ameobi's finest performances including an equalising goal against Barcelona in a 3–1 defeat at the Camp Nou as well as scoring two goals against Bayer Leverkusen in a 3–1 victory. His erratic form has earned him some criticism in the past, and although never having been claimed as a prolific goalscorer, many of his games were as a substitute. Due to injuries in the latter stages of the 2005–06 season, Ameobi gained a regular starting place, and scored six goals in Newcastle's last 12 Premier League games. In the 2006 UEFA Intertoto Cup, Ameobi scored twice in Newcastle's away tie at Lillestrøm SK (3–0), taking him to second place in the club's table of leading goalscorers in European competition with twelve goals, behind only Shearer.

During the 2006–07 season, Ameobi needed a hip operation, a problem which had been plaguing him for two seasons. Newcastle's shortage of match-fit first team strikers during the previous season had forced him to postpone this surgery. The problem eventually forced Glenn Roeder to send Ameobi for surgery two months before the transfer window, making the 0–0 draw away game to Manchester City his last game and ruling him out for the rest of the season. He had made 13 appearances (three as a substitute) and scored five goals. Ameobi and the Newcastle medical team reported his hip operation in the United States was a success and that the club doctors and medical staff would work on his rehabilitation. It was originally thought that he would not be fit to play until the start of the 2007–08 season, but his rehabilitation progressed quickly and he returned with three games remaining in the season, clocking approximately 30 minutes of match action against Reading and making a further two appearances.

However, after failing to impress Newcastle manager Sam Allardyce, or Kevin Keegan on 27 March 2008, Ameobi agreed a loan deal with Stoke City until the end of the season, to help their promotion campaign. It is understood that a loan fee of around £500,000 was agreed and that a possible permanent transfer was also discussed subject to Stoke winning promotion. Ameobi made his debut for Stoke against Sheffield Wednesday on 29 March, the game ended 1–1. After playing for six games and not managing to score despite Stoke's gaining of promotion, Ameobi returned to Newcastle, and Stoke decided not to sign him permanently. On 14 August, Ipswich Town manager Jim Magilton confirmed that the club were in talks with Ameobi and that the club were keen to get the deal finalised as long as Ameobi was willing to play in the Championship. However, on 17 August, Ameobi failed a medical, showing hamstring problems, and the deal collapsed.

In the 2011–12 season, Ameobi became something of a fringe player, with the arrival of Demba Ba and later, Papiss Cissé, pushing him onto the substitutes bench. But on Sunday 16 October 2011, against Tottenham, Ameobi, a 71st-minute substitute for Leon Best, scored a goal late on to make it 2–2. The next few games were an annoyance for Ameobi, with Ba finding his shooting boots and pairing well with Best and with Ameobi's inclusion in the starting line-up against Norwich ending up in a 4–2 defeat. On 4 March, Ameobi was yet again on the bench for a game against Sunderland, and brought on as a substitute for Cissé he scored a 91st-minute equaliser to get Newcastle back on terms and bringing his tally to 7 goals in 12 games against Sunderland for Newcastle, a record only bettered by Jackie Milburn. His prolific goal scoring form against Sunderland has led many sections of the Newcastle support to refer to him as "The Mackem Slayer". His next league goal came nine months later, in a 1–0 win over QPR on 22 December. On 23 May 2014, it was confirmed by Newcastle United that they would be parting company with Ameobi after 14 years of service for the Tyneside club.

On 11 August 2014, Ameobi signed for Turkish club Gaziantep Büyük?ehir Belediyespor on a one-year contract. He made his debut on 13 September, in a goalless draw against Kayserispor, playing the full match and getting booked in the third minute. He scored his first goal through a 35th-minute penalty in the 1–1 draw with Adanaspor on 19 September. Ameobi left the club on 29 December 2014, citing family reasons for his departure. He made 11 appearances and scored 4 goals during his time there.

On 29 January 2015, Ameobi returned to the Premier League by signing for Crystal Palace until the end of the season. He was signed by Alan Pardew, his last manager at Newcastle. On 21 February 2015, he made his debut for the club after being substituted on for Joe Ledley in the eightieth minute against Arsenal. In June 2015, Ameobi was released by Crystal Palace on expiry of his contract. On 23 October 2015, Ameobi signed for Championship side Bolton Wanderers on a short-term contract. He made his debut a day later coming on as a 12th-minute substitute replacing Gary Madine in a 1–1 draw against Leeds United, in which Ameobi gave Bolton the lead in the 32nd minute. He left the club after his contract ended following Bolton's 3–1 victory over MK Dons in which he scored in the 90th minute on 23 January 2016. Following the end of this contract, Ameobi offered to play for Bolton for free but Bolton were unable to do this, due to being under a transfer embargo. On 12 February 2016, he signed for Fleetwood Town until the end of the season after which  on February 3rd, 2017 he joined Notts County until 30 June 2017. On 20 June 2017, he re-signed for Notts County, the length of contract not revealed.

Ameobi had a three-year spell with England's under-21 team, netting seven goals between 2000 and 2003. He is the joint eighth highest goal scorer for the under-21s. In late 2009, Ameobi declared his interest in playing for Nigeria. On 14 January 2011, he was announced in the Nigerian national squad for the first time, for a friendly against Guatemala in the United States, in February. He withdrew from the replacement game against Sierra Leone after breaking his cheekbone in a Premier League match. On 1 November 2011, it was announced that FIFA had cleared Ameobi to play for Nigeria. In October 2012, Nigeria head coach Stephen Keshi expressed his interest in Ameobi joining the squad for the 2013 Africa Cup of Nations. In November 2012, Ameobi received his second call up for the Nigeria national team against Venezuela. He made his debut on 14 November, appearing as a substitute in the 60th minute for former Newcastle teammate Obafemi Martins. In stoppage time at the end of the game, Ameobi laid on a pass for Ogenyi Onazi to make the score 3–1 to Nigeria.

He scored his first international goal for Nigeria on 10 September 2013, against Burkina Faso in a friendly in Kaduna, Nigeria. In November 2013, he scored his second goal against Italy, in a friendly at Craven Cottage. On 12 May 2014, he was named in Nigeria's 30-man provisional squad for the 2014 FIFA World Cup, and later made the final 23-man squad. During the tournament, Ameobi made a total of two substitute appearances for the Super Eagles, failing to score in either and ultimately seeing out his side's 2–0 exit to France as an unused substitute. He has scored 97 goals in 497 games for club and country.

A devoted Christian, Ameobi lives a private and austere life. He is married to Jennifer Ameobi and they have two children. His brothers Sammy and Tomi are also footballers while his sisters Titi is a talented runner and Ifeniona a Pharmacist.

No reviews yet for Shola Ameobi 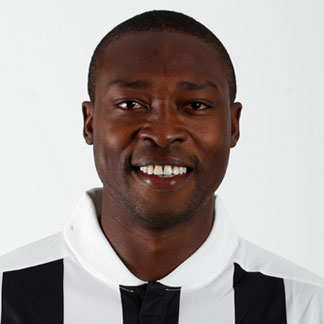