Emmanuel Amunike was born on December 25th, 1970 in Eziobodo, Owerri West local government area of Imo State, Nigeria to Michael Amuneke. He is a retired professional footballer who played as a left winger for FC Barcelona and the Nigerian national team, and a current coach.

In his early career, Amunike won the domestic league titles in Nigeria and Egypt, while playing for Julius Berger F.C. and Zamalek SC respectively. In 1994 he signed for Sporting Clube de Portugal, scoring seven league goals in his first season, including one against S.L. Benfica in the Lisbon derby (1–0 home win on 1 December 1994), and adding the campaign’s Portuguese Cup.

In the 1996 December transfer window, Amunike was bought by La Liga giants FC Barcelona for $3.6 million, making his official debut on the 22nd in a 1–0 home win against Celta de Vigo and scoring on 16 March of the following year in a 1–0 success at CD Logroñés. His spell in Catalonia would be effectively ended in the 1997 off-season after he suffered a serious knee injury, following which he appeared very rarely for the club (only three league games in three full seasons combined).

Amunike never fully recovered from his condition after being released by Barça in 2000, playing for Albacete Balompié (also Spain,Segunda División), Busan I’Cons (South Korea, only a couple of months) and Al-Wahdat SC (Amman) (Jordan), retiring from football at the age of 33. In 2008 he spent some time as an assistant coach at Saudi Premier League side Al-Hazm, but left to become ascout for Manchester United.

His professional career was blighted by injury. He represented Nigeria at the 1994 World Cup. Amunike played 27 times for Nigeria, scoring nine goals. He was part of the team that participated at the 1994 FIFA World Cup in the United States, a first-ever for the African country, scoring against Bulgaria (3–0 group stage win) and Italy (1–2 round-of-16 loss) also in that year, he helped the Super Eagles win the Africa Cup of Nations in Tunisia, eventually being voted African Footballer of the Year. Additionally, Amunike played all the games at the 1996 Summer Olympics in Atlanta, scoring the winning goal in the final as the national team won the gold medal. Knee problems kept him out of the 1998 World Cup.

On 23 December 2008, Amunike took over the head coaching duties at former team Julius Berger, after completing two years of coaching courses in Europe.  For a while, he combined this position with the role for the Red Devils, but eventually quit his post in England to concentrate on his coaching career. Amunike was sacked halfway through his first season after conflicts with management, despite saving the team from relegation. The club however later claimed he was sacked for “over gross insubordination”. He was hired in early November 2009 as the new coach of Ocean Boys FC. Amuneke who won the U17 FIIFA World Cup with the Eaglets assistant coach in 2013 and chief coach in 2015, and also managed the U20 Flying Eagles. He became coach of Sudanese Al Khartoum SC in November 2017, and left in March 2018.

Amunike's younger brothers, Kingsley and Kevin, were also footballers. Both also played several years in Portugal, amongst other countries. On April 11th, 2018, the Former Golden Eaglets Chief Coach and Super Eagles Legend, lost his Father, Michael Amunike in Festac Town, Lagos after a protracted illness at the age of 86.

Amuneke won the African Player of the Year in 1994. The Ex-international was conferred with a chieftaincy title in Eziokele Community in Owerri West Local Government Area, Imo State in December 2016. Amuneke was conferred with the title of Aka Welitere Mba1 (the hand that promotes the community) by the King.

No reviews yet for Emmanuel Amunike 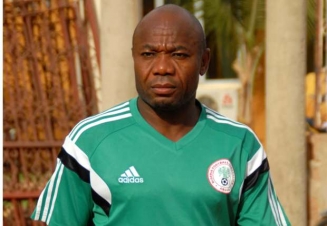