Abdullahi Ibrahim Alhassan (popularly known as Mu'azzam) was born in Kano, Nigeria, on November 3rd, 1996. Born into a typical Kano Muslim home, Alhassan grew up to become a successful professional footballer. He currently plys his trade with FK Austria Wien in the Austrian Football Bundesliga, where he plays as a forward. His versatility sees him also feature at positions upfront – false 9, 10, 8, 6 and a No 8 in the central midfield.

Alhassan grew up in his hometown of Kano. He joined F. C. Hearts Academy in the city before being promoted to the team's youth team.

While playing for the U-20 team of Nigeria, Alhassan joined Wikki Tourists of Bauchi in 2015 where he featured in a season hampered by injuries. He played 5 games for Wikki scoring twice. During his time at the club, he had an unsuccessful trial with HNK Rijeka of Croatia. He was also instrumental to the qualification of Wikki to the CAF Confederations Cup and his impressive perfomance did not go unnoticed.

In 2016, Akwa United landed the signature of the former Flying Eagles midfielder. Top Nigerian clubs such as Enyimba FC, Rivers United, Kano Pillars and FC Ifeanyi Ubah were all linked with the player. He scored 12 goals with Akwa in the 2016/2017 season.

In August 2017, Alhassan joined Austrian club FK Austria Vienna on a season long loan from Akwa and FC Hearts Academy who still hold a huge chunk of the player's rights. He signed with an option of a permanent move to the 24-time Austrian champions. He described the move as a time to live his dream. Alhassan scored his first goal for Austria Wien in their 2-0 victory over Altach in the Austrian Bundesliga clash at Franz Horr Stadium on October 1st, 2017.

A winner of the African U-17 and U-20 continental titles with Nigeria, he made his senior international debut for the Super agles in their 3-0 friendly win over Togo in June 2017.

Since his tender age, Ibrahim Alhassan has been a supporter of Kano Pillars. Alhassan is currentlynot involved in any kind of love affair so far. He is currently in the starting phase of his career thus, might be focused on developing his rising career rather than being involved in any relationship. He is active on social media platforms - Instagram and Twitter.

In April 2017 Alhassan won the League Bloggers Awards for NPFL Player of the month.

No reviews yet for Ibrahim Alhassan 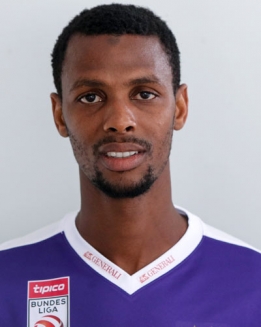