Victor James Osimhen was born in Lagos, Nigeria, on December 29th, 1998. Born to Pa Osimhen of Edo State, he is the last of six children, he learned how to play football by watching his elder brother. He is a Nigerian football player who plays center forward, and came into limelight in 2015 after performing well at the 2015 U-17 FIFA World Cup and currently plays for VfL Wolfsburg in the German Bundesliga.

Osimhen hawked sachet water and other commodities on the streets of Lagos together with his siblings to support their humble parents. Just like many kids, he started football at a very tender age and it was not long before his coaches noticed something special about him. He joined the senior team of a neighbourhood club as a striker, where his elder brother, Andrew, also played.

Osimhen started his career at the Ultimate Strikers Academy of Lagos where he played until 2017. He got his first start in the U-17 team in a 2014 friendly match. He scored two goals on this debut. One of his best goals was his second goal against Zambia at the 2015 U-17 African Championship in Niger 2014. This, he believed was very good because it was solid reflection of what he had learned in training under coach Amuneke which is “accuracy first, before power.” He also believes it was a great tournament because the team was able to achieve their objective of qualifying for the World Cup in Chile. He was one of the top goal scorers at Niger 2015 with four goals in 6 matches. He is also currently tied at 9 goals with Ivory Coast’s Souleymane Coulibaly and France’s Florent Sinama Pongolle.

Osimhen was pivotal to the Nigeria's U-17 success at the FIFA World Cup in  Chile, scoring 10 goals to emerge the highest goal scorer at the comperition. After the World Cup, it was revealed that many huge clubs from England such as Arsenal, Manchester City, and Tottenham Hotspur, were after his services. Moments after he was named Youth Player of the Year at the Caf Awards in Abuja in January 2016, he announced he would pursue his professional career at Wolfsburg, a German Bundesliga club.  According to him, the Wolfsburg’s coach assurances were a morale booster for him and that he prefers playing for the German club to any other club in Europe. He signed a three-and-a-half-year deal until June 2020 and made his debut in the German top-flight in May 2017 as a substitute against Borussia Monchengladbach.

Oshimen has been described as ‘very humble’ and currently dates an adorable girl named Blessing. He has a fond admiration for former African Footballer of the Year and Ivorian legend, Didier Drogba.

At the 2015 U-17 FIFA World Cup, Osimhen won the Golden Boot as the top scorer and the Silver Ball as the second best player at the competition. He also won the 2015 Glo-CAF Youth Player of the Year Award.

No reviews yet for Victor Osimhen 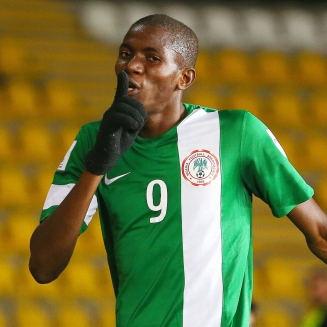