Speed Darlington was born in his hometown of Arondizuogu in Ideato North local government area of Imo state, Nigeria. He is a controversial US-based Nigerian rapper, who has gone viral several times on social media after his music videos hit the internet.

Speed grew up with his family in Okigwe before moving over to the United States where he has established himself.

Speed Darlington began to trend on social media sometime in 2016 after a couple of his music videos hit the internet. From giving himself titles like “energy god”, “Scorpio king” “ Irregular speedometer” to associating himself with phrases such as “I am not regular” “Inspiring Diddy since 2017”, Speed has proven he is not one to be fazed by anything. One of his most popular hits "bang da dadang" was released in 2017. Despite the backlash from a section of the public, he stays optimistic about his journey to stardom. He constantly refers to himself as an international rapper, always ready to spit a freestyle and never hesitates to request for support or ask for what he wants.

Speed has not left his controversial style outside the political spac. On one of his Instagram rants, he expressed anger at US President, Donald Trump, for granting African artists, visas to the US to hold concerts, to the satiric post where he called out dogs bearing the names of allegedly corrupt Nigerian leaders, he seems to be a man of the people. He has even expressed his views on IPOB in a post where he put up a picture stating “Buhari is dead! Glory be to God!!” and supported it with the caption:” I’m happy! If I can’t be the 1st president of Biafra, then I don’t want it.”

Darlington is certainly not regular. He is hardly ever pressured to conform to fashion or beauty trends. He actually has a unique style which he constantly rocks. Most outstanding perhaps, is his unique hairstyle, which he has confirmed to be a “transmitter and receiver of energy”.

In September 2017, the rapper took to social media to celebrate after he made $135 in music sales for the first time in 7 years. He wrote, "Lmaoooo! Thank God! Finally I have made $100 & more from music selling. After 7 years I been releasing music singles + video to help push it. #BangDadaDangdone make me money lol. Still grateful *My Party* made me 13$."

When it comes to love, Speed is not shy about his preferences. He is also not one to chase after women or spend money to get their attention, as he believes his person is already more than enough to offer. According to him, he has a huge crush on actress Tonto Dike.

From his throwback posts to mentions, the local traditional beads he wears with everything and the occasional use of his indigenous dialect, Speed is always alluding to his heritage and descent. 10 minutes on his social media page is enough for you to figure out he is an Igbo boy from Nigeria.

In 2017, Speed revealed that he is the son of late folk singer, Chief Pericoma Mezuo Okoye, who died on February 16th, 2017. He also expressed his hatred for the father he claims killed those who offended him. "I HATED him & I kinda miss him indirectly now that his gone. I have to pay to punish people now. When he was around if girl say no to me or someone cross me? I just call him and cry over the phone and he took care of the rest," he said.

No reviews yet for Speed Darlington 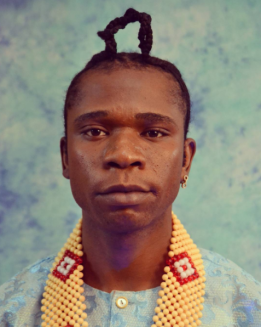