Omatsone Folarin Aluko was born on February 19th, 1989 in Hounslow, England. Aluko was born to Gbenga Daniel Aluko of Ode-Ekiti in Gbonyin local government area of Ekiti State. Known as Sone Aluko, he is a professional footballer who plays as a forward or winger for English Football League side, Reading FC, and the Nigerian national team.

Aluko grew up in England where he joined Birmingham City's youth team in 1997. After spending ten years at the academy, he was promoted to the first team in 2007 but failed to make any league appearances.

From Birmingham City, Aluko joined Aberdeen on loan in the 2007–08 season and was loaned to Blackpool at the beginning of the 2008–09 season. After just one appearance for Blackpool, he signed for Aberdeen permanently in August 2008. He left Aberdeen in July 2011 at the end of his contract, signing for Rangers in November 2011. He scored 12 goals in 21 appearances during the 2011–12 season.

On 25 July 2012, it was confirmed Aluko signed a two-year deal with Hull City. He made his debut in the home match against Brighton and Hove Albion on 18 August. On 1 September 2012 he scored his first goal for the club against Bolton Wanderers at the KC Stadium. After the international break, Aluko scored his second goal for Hull City in the following game against Millwall to make it 4–0 before half time. On 2 October, Aluko made it 3 in the Hull City shirt by scoring a wonderful strike from 20 yards out into the top corner against Blackpool. Following the expiration of his contract with Hull in June 2016, Aluko joined Fulham on a free transfer on July 8th. He signed a two-year deal with an option for a further year. On 13 August 2016, Aluko scored his first goal for Fulham, the opener in a 2–1 victory over Preston North End. On 29 August 2017, he joined Reading for an undisclosed fee, signing a four-year deal.

Aluko represented England at under-16, under-17 and under-18 level before making his debut for the England under-19 team on 11 September 2007 in a friendly against Belarus under-19. He was involved in two of the goals in a 4–0 win. He was selected in the 23-man provisional squad for the 2008 UEFA European Under-19 Football Championship but did not make the final 18.  Aluko was named in the squad for the Nigeria under 20 national football team for the 2009 FIFA U-20 World Cup in Egypt. He played in games against Venezuela, Spain and Tahiti. He was called up to the Nigerian national team for a friendly against the Republic of Ireland on 29 May 2009, an offer which with the support of his family he chose to accept. He made his full international debut in the starting eleven, forcing the Irish goalkeeper to save his 40-yard lobbed free kick and playing the first 61 minutes of the game. In April 2010, he was named in the provisional Nigeria squad for the 2010 FIFA World Cup, but failed to make the final cut. He was finally called up by former Nigerian coach Stephen Keshi and therefore has a chance to add to his one cap against Republic of Ireland in May 2009 after he represented England at various age-group levels. He was brought into the squad to face Namibia and Malawi in the World Cup Qualifiers in the month of June 2012, but was an unused sub for both games. Aluko was included in a pre-selection for the 2013 Africa Cup of Nations but had to renounce because of an injury. He scored his first goals for Nigeria against South Africa in a 2–2 draw on 19 November 2014 in the qualifying round for the 2015 Africa Cup of Nations.

Aluko's older sister Eniola Aluko was born in Nigeria and is also a professional footballer who plays for Chelsea and the English Women Teams. His father was a member of parliament representing Ekiti South senatorial district between May 1999 and May 2003, while Bolaji Aluko, a Professor of Chemical Engineering at Howard University, is his uncle.

No reviews yet for Sone Aluko 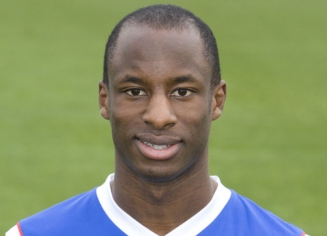