John Ubong Friday, was born in Awka Ibom State, NIgeria, on March 3rd, 1998. He is a professional footballer who plays as a striker for Akwa United in the Nigerian Premier League.

In the past years, Friday has been a pivotal player for Akwa United. In 2017, the team won the Federations Cup beating Niger Tornadoes on penalties in a keenly contested game played in Agege, Lagos. This qualified the team for the 2018 CAF Confederations Cup. The striker who is represented by PiSk Piotr Skorupa, lost out in the preliminary round of the competition with his team.

Friday represented Nigeria at the 2017 WAFU Cup where the team lost in the final to hosts Ghana. He also helped the team qualify for the 2018 African Championship but did not make the final squad list for the tournament in Morocco.

Friday’s long range strike for Akwa United against ABS on Matchday 21 won the VAT Wonder Goal of the week in the 2017 season.

No reviews yet for Ubong Friday 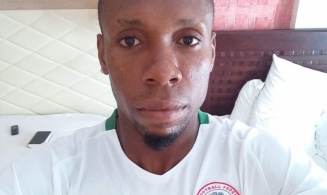