Michael Okechukwu Uchebo was born on February 2nd, 1990 in Enugu, Enugu State, Nigeria.  He is a professional footballer who plays as a striker. He has played for Nigeria, at international level.

Uchebo grew up in Enugu where he joined Rangers' youth team. In 2008 he was promoted to the first team, playing just one season with the club.

Uchebo signed a three-year contract with VVV Venlo in October 2009. Venlo's football director Mario Captien described him as physically very strong striker who is a target man at the front. Dutch Voetbal International, referred Uchebo as the new Kanu Nwankwo. In November 2011, Venlo's chairman, Hai Berden, revealed that the club is in talks with English side Stoke City regarding the transfer of Uchebo. In January 2012 Uchebo joined Stoke City on trial. However, at the end of the trial, the club decided not to sign him. On 25 January, Uchebo joined Rangers on a trial. His trial at the club ended after just one day, with conflicting reports from the player and Rangers. The agent of Uchebo claimed that player cut short his trial due to a poor impression of Rangers after Ally McCoist did not attend the single training session in question, while McCoist said that it was a club decision.

After saving Venlo from relegation with a late goal in extra time of the Eredivisie relegation playoffs second round match against SC Cambuur, Uchebo revealed that he won't renew his expiring contract at VVV. On 29 May Venlo announced that they had reached an agreement with Cercle Brugge. Uchebo subsequently signed a two-year deal with Cercle Brugge. On 11 October 2014, Uchebo sign for Boavista on a three-year contact. He scored his first goal on his first match, against Paços de Ferreira, in a 2-1 home loss. He left Boavista in 2017 over wage disputes. Earlier in 2016 he told the Guardian, "I’ve been dying in silence, with nobody to help me,” Uchebo said at a specially arranged press conference last week. “I remember going to have a shop and not having money to buy something; I came to [Boavista] and said I needed money for food. They haven’t paid my house rent, haven’t paid for my electricity – I remember two days when I didn’t have any electricity in my house. They didn’t care; they don’t give me any money and don’t care for me."

Uchebo was a member of the Nigeria U-20 team and in August 2008 he scored his first goal for Nigeria in a match against Togo in the West African Football Union tournament. He also played at the U-20 2009 African Youth Championship tournament, scoring one goal in three matches. He was described in the media as the most sought-after player among the Nigeria squad in the tournament.

In June 2011 Uchebo was called up by current Olympic team and National U-23 coach Austin Eguavoen for the crucial return leg of the Olympic qualifiers against Tanzania. In October 2011 U-23 coach Austin Eguavoen visited the Netherlands and met with officials of VVV Venlo to secure the release of Uchebo to participate the inaugural edition of the CAF U-23 championship in Morocco. He received his first call-up to the Nigerian national team in February 2014. Uchebo earned his first senior cap on 6 March, in the 0:0 draw with Mexico in a friendly match, playing the first half before being replaced by Leon Balogun. In the next of Nigeria's matches, a 2-2 draw with Scotland at Craven Cottage, Uchebo played 55 minutes of the match. After Scotland had taken the lead, Uchebo equalised before the break with a mid-range deflected effort. His replacement was Peter Odemwingie.

No reviews yet for Michael Uchebo 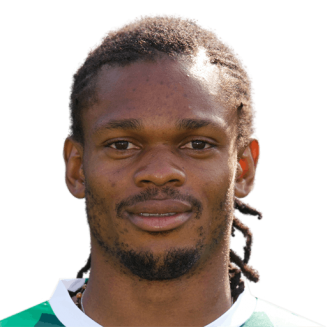