Bartholomew Owogbalor Ogbeche was born on October 1st, 1984 in Ogoja, Cross River State, Nigeria. He is a professional footballer who plays as a forward for Dutch club, Willem II, and the Nigerian national team.

Ogbeche grew up in Ogoja. Still a youngster, he was signed by French Ligue 1 club Paris Saint-Germain FC, making his debuts with the main squad during the 2001/2002 season.

After failing to settle in France and also suffering a thigh injury while serving a two six-month loans, to fellow league sides SC Bastia and FC Metz; for the former, he netted in a 4–1 home win against Olympique de Marseille on 7 March 2004– the Corsicans secured their top flight status, and he left PSG for good in June 2005. After a brief time in the United Arab Emirates, he moved to Spain, first with Deportivo Alavés in Segunda División. Although he posted good individual numbers, the Basque team failed to return to La Liga but he joined another club in the former tier, Real Valladolid, making his debut on 26 August 2007 in a 1–0 away success over RCD Espanyol.  In late August 2009, after two seasons of intermittent use, Ogbeche arranged a one-year deal with Andalusia's Cádiz CF, in the second level. He finished the campaign as team top scorer, but they finished in 19th position and were relegated. After one year in Greece with Kavala FC, Ogbeche joined Football League Championship side Middlesbrough on 18 October 2011, signing until the end of the season. He scored his first goal for his new club on 17 December, against Cardiff City in a 3–2 away win; on 5 March 2012, he came on as a substitute towards the end of the home game against Barnsley, lobbing the ball over Luke Steele for the final 2–0. In January 2014, he moved clubs and countries again, signing for SC Cambuur in the Netherlands after a very brief spell back in Spain with Xerez CD. He scored once and provided an assist in his Eredivisie debut, helping to a 3–1 home win over SC Heerenveen.

A Nigeria international since 2002, aged 17, Ogbeche was picked for that year's FIFA World Cup, and appeared in two group stage matches in an eventual group stage exit.

Ogbeche is a practising Christian.

No reviews yet for Bartholomew Ogbeche 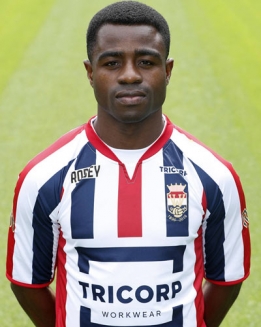