Samuel Sochukwuma Okwaraji was born in Orlu, Imo State on May 19th, 1964. He was an extremely gifted footballer who played as a midfielder dictating th tempo of the game. He was a master on the ball and possessed an energy level opponents found difficult to deal with. Okwaraji was indeed the undisputed star of the Green Eagles team. Apart from being excellent on the football field, the Orlu athlete was also a gifted scholar, bagging a degree in Law from the University of Rome, Italy, and on the verge of earning a doctorate around the period the game was played. He was indeed a special breed of sportsman.

Samuel Okwaraji would have been 57 years old, if he were alive today. May his soul rest in peace.

Okwaraji was the forth of seven children. He was quite brilliant right from his primary school and was excellent in his academics. He was very active and started teaching his peers from Class four. He left Nigeria immediately after his secondary education, under the sponsorship of his uncle who lives in Port Harcourt and was Okwaraji's mentor. He sent Okwaraji to the University of Rome for his first degree in law where made first class. He immediately had his masters in international law from the University of Rome also graduating with a distinction as well. During this time, he played with the academy team of AS Roma.

Okwaraji made his national team debut against Algeria at the Nnamdi Azikiwe Stadium in Enugu in a Seoul 1988 Olympic qualifier and played a key role at the 1988 African Cup of Nations in Morocco, where he scored the fastest goal of the tournament against Cameroon in the group stages. Tragedy howver struck during a 1990 World Cup qualifier game against Angola on August 12th,1989. Around the 77th minute, moments before the end of the game, the skillful player crashed to the ground after a supposed heart failure. There was tension everywhere. Silence swept all across the packed arena and beyond thereafter. Millions all across the country stayed glued to their television sets and radios to monitor events. But few minutes after he was rushed to the clinic inside the stadium complex, news filtered in and it was the unbelievable. Okwaraji was dead. The star Nigerian had banked on to propel her to a first World Cup the following year, had passed on. Autopsy on his remains later showed that he had died of an enlarged heart.

Okwaraji’s was indeed seen as a patriot. At one occasion, when he had the chance to play for his fatherland but his club would not agree. His club manager was said to have asked the Nigerian Football Authorities to pay an estimated cost of $45, 000 for their star player’s match bonus and an expected loss in the club’s gate taking for the period in which he would be on national duty. Hearing about this agreement, this patriot hit back at his club saying: “I signed to play football for you on certain conditions, but I don’t think it includes reselling my services to my country. You cannot stop me playing for my country and let me tell you, I am going to represent my country in the World Cup in Italy whether you like it or not and I would very much like for you to be there.” No doubt, Okwaraji paid his way to play for Nigeria without asking for a dime. He would come to camp uninvited and beg the coach to throw the jerseys on the floor for players to fight for. It was this move that heralded the era of throwing the camp open. He was not afraid to put his career on the line for his country. He put his life on the line too.‎

Okwaraji was married to Jane who is now based in Owerri, Imo State. He was having his Ph.D studies at the time of his death. Apart from his traditional mother tongue, Igbo, Okwaraji also spoke German, English, Spanish and the Italian languages .

In a documentary that was commissioned by the Chike Okagbue Foundation (COF) on the life and times of the late football star, as well as possible efforts if any at immortalising his values, his septuagenarian mother, Mrs. Jane Okwaraji stated her displeasure at the treatment accorded to the memory of her late son. His brother Patrick also voiced his displeasure at the country's failure to properly immortalise his late brother.

In 2009, a memorial game was played in his name when former Lagos State Governor, Babatunde Fashola, celebrated him with former internationals at the Teslim Balogun Stadium. In 2011, Okwaraji was immortalised with a burst erected at the National Stadium in Lagos. Okwaraji’s portrait was displayed at the eight venues of the 2015 Federation Cup quarter –finals on Wednesday August 12;  Enugu, Benin City, Neros Stadium, Oleh, Lokoja, Abuja, Ilorin and Makurdi are the venues.

No reviews yet for Samuel Okwaraji 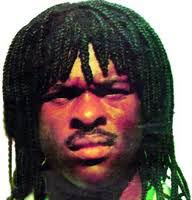