Odion Jude Ighalo was born on June 16, 1989 to the family of Paul Ighalo and Martina Ighalo. Odion is a Striker who plays for Chinese club Changchun Yatai and the Nigerian national team.

Although born in Lagos, he was raised in Edo State. He however spent the later part of his early life in Ajegunle, Lagos.

He started his career at Prime FC and Juius Berger. It was during his time at these Nigerian clubs that he was discovered by FIFA agent, Marcelo Houseman, who recommended him to Atta Aneke, after which he was taken to Norway's Lyn.

Later on, he was signed by the Italian club, Udinese, of which he spent most of his time on loan at Granada and Watford. Watford later terminated Ighalo's loan and re-signed him on a permanent deal just after he was released from his contract with Udinese. While at Watford, Ighalo's performance was simply superb, and earned him December Premier league Player of the month.

Ighalo joined the Chinese club, Changchun Yatai F.c. on January 21, 2017 for a reported fee of £20 million. He has scored 106 goals in 304 fixtures for his various clubsides.

Odion earned his first nation team call-up in 2015 from then interim coach Daniel Amokachi. He was part of the three overage players that helped Nigeria secure a bronze medal at the 2016 Olympic tournament in Brazil, the country's only medal at the event.

Odion is a devout Christian. He is often seen raising his hands to the sky while celebrating a goal. In April 2016, he announced the death of his father, Paul Ighalo. The striker has been married to Sonia for eight years, and the couple have three children (two sons and a daughter).

He once revealed that he made the move to China to secure the future of his children. According to him, "Part of the decision I went to China was for them [his kids]. Now they won’t understand the type of sacrifice because they are young. But when they grow up and see everything I have achieved and put in their name they will appreciate. I don’t regret moving to China."

Odion Ighalo's net worth is said to be $20 million. In December 2017, he opened a motherless babies home in Lagos, serving as one of his various charity projects.

In December 2015, he won the Premier League Player of the Month.

No reviews yet for Odion Ighalo 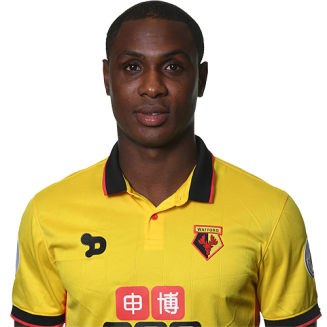