Dele Sunday Alampasu was born in the Itoki area of Ifo Local Government Area of Ogun State, Nigeria, on December 24th, 1996. Known for his dreadlocked hairstyles, he is a professional footballer who has featured at age grade competiotions for Nigeria, and currently plays for

Alampasu grew up in a two room apartment built on a half plot of land at Itoki by his father, Tomi Alampasu, who made his income from the popular "okada" riding business.

Alampasu burst into the scene when he was the Number 1 choice for the Golden Eaglets at the 2013 FIFA U-17 World in the United Arab Emirates (UAE) where he was in goal for all the team’s seven matches on their way to winning the tournament for a record fourth time for the country and was rewarded the adidas Golden Glove award. He was a reserved goalkeeper for the Flying Eagles at the FIFA U-20 World Cup New-Zealand 2015. He sat out most of the matches following his transfer to CD Feirense where he played only two full matches through the concluded season  with  stand-out performances in the 1-0 win against FC Famalicão  in the LigaPro and 2-0 win against FC Porto in the Carlsberg Cup.

September 4th, 2015 was a milestone in the career of Alampasu following his transfer to Portuguese second division side SC Feirense on a three-year deal after he cancelled an agreement with Estoril. His first game for CD Feirense was against FC Famalicao at Estadio Municipal 22 de junho on December 30, 2015.

Alampasu was rewarded the adidas Golden Glove award at the FIFA 2013 U-17 World Cup.

No reviews yet for Dele Alampasu 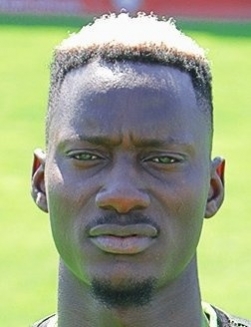