Noah Joel Sarenren Bazee in Stadthagen, Germany on August 21st, 1996 to a Bayelsa State born Nigerian father and a German mother. He is a professional footballer who plays for Bundesliga side Hannover 96.

Bazee grew up in Walle near Celle, playing football with numerous teams.

Bazee can play on either flanks or in a role behind the main striker. In the beginning of his career, he played around two years for the youth team of SSV Sudwinsen from 2005 to 2007. He then joined the Tus Celle FC in 2007 until 2009 and played two years for JFC Allertal until 2011. He joined the TSV Havelse where he played with the U-17 team until 2013. He moved to Hannover 96 team on a free transfer where he played in the Under 19 Bundesliga andRegionalliga Nord.

He signed his first professional contract with Hannover 96 on the 17th of March 2016 at the age of 19 and made his Bundesliga debut on the 8th of April last year against Hertha Berlin, a game they drew 2-2. In the 2015/2016 season, he made five Bundesliga appearances for Hannover 96 before their relegation to the second tier but made an instant return to the top tier division in May 2017.  He has a contract with the team which keeps him until June 30th, 2021.

Bazee uses the shoe model of Nike Mercurial Vapor XI FG since July 10th, 2017. He also serves as the brand ambassador of brand Nike which is also a good source of his income. His current market value is estimated at £1.35million as of January 23rd, 2017.

No reviews yet for Noah Bazee 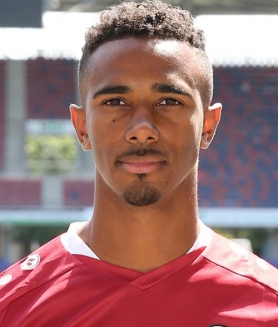