Chief (Dr.) Sunny Iwedike Odogwu was born on March 20th, 1931 in Cross River State to parents from Asaba in Delta State. He is an administrator, industrialist, insurance consultant and businessman. He is the founder and chairman of SIO Group of Companies, which has investments in property development, shipping, finance, industrial relations and hotel management.

Sunny Odogwu would have been 90 years old, if he were alive today. May his soul rest in peace.

Sunny began his secondary education at Government Elementary School Lagos. He later moved to Lagos Grammar School and completed it at Ilesha Grammar School in 1946.

At the end of his secondary education, Sunny was appointed trainee pilot at the Operations Department of the Nigeria Airways. This lasted for a year from 1947 to 1948. From 1948 to 1952, he worked as an Insurance Inspector and later Manager at Norwich Union insurance Company (BEWAC), Lagos. In 1953, he founded Dyson and Diket, an Insurance Broker. He was also appointed Insurance Inspector ay Pearl Assurance Company, Holborn, London and Manager at C.T. Bowring Insurances, London. He also managed the Swiss General Insurance Company, Zurich, Switzerland from 1954 to 1958.

In 1958, Chief Sunny worked as Assistant Director at the Nigeria office of C.T. Bowring. He became Proprietor and Managing Director, African Underwriters Limited and Managing Director, African Prudential Insurance Company Limited in1966. He was appointed Chairman, African Prudential Insurance Company Limited in 1976. He founded SIO Industries Limited, Asaba in 1988 and has been the Chairman since. He has also served as Chairman in various other companies such as Sodik Electrical Engineering, Nigeria Lines Limited and Polypropylene Plant in Asaba. Also Chairman at Newbreed Magazine and Roc International Hotels in Jos and the Post Publishing Company Limited, Apapa, Lagos.

He was Director of Sanyo Nigeria Limited and National Fertilizer Company, Onne. As a publisher he worked The Post Express Newspapers where he was also the Chairman. He is associate of the Chartered Insurance Institute, London, was elected underwriting member, Lloyds and is a fellow at the Nigerian Corporation of Insurance Brokers.

Sunny got married to Theresa A. Ibike in 1962. They have nine children and several grandchildren. He has homes in Ikoyi, Lagos and Asaba, Delta State.

No reviews yet for Sunny Odogwu 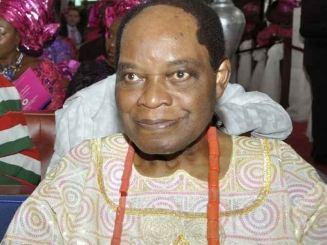