Rabiu Afolabi was born on April 18th, 1980 in Osogbo, Osun State. He is a Nigerian retired footballer, who played as a centre-back.

Afolabi began his football career in 1997 with NEPA FC of Lagos. He soon left Nigeria and moved to Belgian side Standard Liège after impressing at the 1997 Meridian Cup. In the 1997/1998 season, he played in three matches in the Eerste Klasse, of which two in the first team. Standard, however, played a poor season and finished 9th place in the table. In the next season he played in 26 league games, scored a goal and with Liège finishing in sixth place in the league. Standard has also played in the final of Cup of Belgium, losing 1–3 to Lierse S.K. In the 1999/2000 season, Standard finished fifth place; Afolabi made 24 appearances scoring 1 goal. Having become a regular player at Standard Liège, Afolabi signed for Italian Serie A side Napoli on loan ahead of the 2000/2001 season. At Napoli, he failed to break into the first team, in part due to injuries. When fit, he played in the club's reserves. After half a season in Italy, he returned to Liege. After the 2001/2002 season he was named the best defender in Belgium, Standard finished fifth. The next season was not as successful: Afolabi played only 14 league matches, Standard completed the season in the 7th position.

In 2003, Afolabi decided to move to an Austrian club Austria Wien on a free transfer. He made his debut for the club in the Austrian Supercup, which Wien won 2–1 against FC Kärnten. Five days, he made his league debut for the club, again versus FC Kärnten, in a 2–1 loss. In his first season, Afolabi played a total of 33 matches. After the 2004/2005 season, some Austria Wien players were linked a move away from clubs. Among them was also Afolabi, who joined Sochaux for a €2 million transfer fee. In his Ligue 1 debut on 13 August 2005 he came on as a substitute for youngster Jérémy Ménez. Sochaux won the away match against Nice 2–1 but Afolabi was sent off in the 87th minute of the match. Towards the end of the season, Afolabi scored his first goal, on 6 May 2006, in a draw at home to Troyes. The club finished in 15th place. After spending four seasons at Sochaux, he left the club as a free agent at the end of the 2008/2009 season. He returned to Austria, signing a two-year contract with Red Bull Salzburg having been previously linked with newly promoted Premier League side Burnley. He became a regular starter in central defence. In February 2010, he scored the winning goal away to title rivals SK Rapid Wien which helped keep the Red Bulls on course for the championship. Eventually, Red Bull Salzburg would win the title.

Following his release from Salzburg in 2011, Afolabi was linked with German side Eintracht Frankfurt but on 31 August 2011, he returned to France joining recently relegated Monaco on a free transfer, agreeing to a two-year contract with the club. On 19 September 2011, he scored his debut goal in a 1–0 victory over against Arles-Avignon. Over time, he featured less and less at Monaco and after one year at the club, it was announced he had left the club by mutual consent with one year of his contract remaining. After eight months without a club, Afolabi went on trial at Danish Superliga club SønderjyskE, with a view of earning a contract. On 13 March 2013, he eventually signed with the club for the rest of the 2012/2013 season. After just three months at the club, he left Denmark and announced his retirement and the intent to pursue a career in football management and scouting, having earned a certificate.

Afolabi played a vital role for Nigeria in the 1999 African Youth Championship, coming from defence to score the two goals against Cameroon in the semi-final. Nigeria eventually finished second in the tournament after losing 0–1 to the hosts, Ghana, in the final. He then captained the Nigerian under-20 team in the 1999 FIFA World Youth Championship in Nigeria. On 17 June 2000, Afolabi made his full international debut for Nigeria in a 2002 World Cup qualifier against Sierra Leone. He was part of the Nigeria squads at the 2002 and 2010 World Cups.

His name, Afolabi, means "Born into wealth". His nickname in Nigeria is Robocop because of his stiff movements. In 2011, Afolabi was involved in a charity called "The Rabiu Afolabi Educational Foundation" by setting up a foundation, which he started out with a donation of 50,000 customised books worth about $20,000 to selected public primary and secondary schools in his home state of Oshun State.

No reviews yet for Rabiu Afolabi 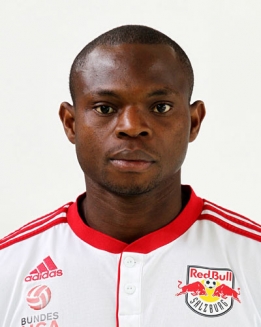