Oladele Muniru Ajiboye wwas born on August 7th, 1990 in Osogbo, Osun State, Nigeria. He is a professional footballer who plays as a goalkeeper Plateau United FC and the Nigerian national team.

Ajiboye began his career with Prime F.C., and in September 2008 joined Wikki Tourists F.C. After one year with Wikki Tourists, where he played 14 games, he left on 16 September 2009 to sign with the Spanish club Pontevedra CF. After being released from Pontevedra in November 2011, he signed the next month with Shooting Stars. After 3SC's relegation in 2013, he signed to play for Nasarawa United. However, transfer issues kept him from playing until two months in the new season. In January 2017, he joined Plateau United from Warri Wolves at the expiration of his year-long contract, and subsequently won the Nigerian Premier League title with Plateau that same year.

Ajiboye represented Nigeria at the 2007 FIFA U-17 World Cup in the Korea Republic, winning the championship with the Golden Eaglets. He got the nickname "Aji Boy" at the competition. On 15 December 2008 he was called for the Nigerian under-20 team for the 2009 African Youth Championship in Rwanda and was a member of the 2009 FIFA U-20 World Cup in Egypt. He was Nigeria's starting goalkeeper for the 2012 Olympic qualifiers and All Africa Games qualifiers under coach Augustine Eguavoen.

Prior to the 2007 FIFA U-17 World Cup, a reporter discovered that Ajiboye was 12 years older, married and had two kids with his wife expecting his third child, a fact that was already known by the Secretary-General of the Nigerian Football Federation.

In 2018, he played in the final of the African Nations Championship which Nigeria lost 4-0 to host Morocco.

Ajiboye won the golden glove for the best goalkeeper at the 2007 FIFA U-17 World Cup in Korea.

No reviews yet for Dele Ajiboye 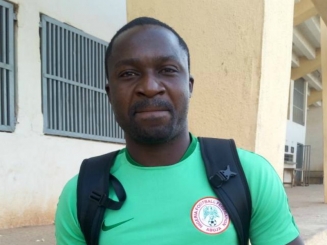