Christopher Oladipo Ogunbajo was born on December 12th, 1923 in Ijebu Ode, Ogun State, Nigeria. He is a corporate lawyer, business man and philanthropist.

Chris born in Erunwon-Ijebu into one of the most prominent families in that human settlement, the Ogunbanjo family. His father was a Headmaster, a Deacon and later became a very prominent Pastor and Canon around the Old Western Region. The mother, the late Madam Towobola, hailed from a neighbouring village, Ijebu-Imushin.

Chris attended St. Phillips Primary School, Aiyetoro, Ile-Ife before proceeding to Oduduwa College, Ife for his secondary education in 1936. In 1938, he moved to the prestigious Igbobi College in Lagos where he completed his secondary education. He obtained a degree in law in 1949 and was called to bar a year later.

Chief Ogunbanjo bgan his Legal Practice in 1950 as a Partner in a law firm then known as Samuel, Chris & Michael (made up of the late Chief Samuel Akintola, former Premier of Western Nigeria, Chief Christopher Ogunbanjo and late Justice Michael Odesanya) whose offices were situated at Tinubu Square in the heart of Lagos. After the dissolution of the partnership in 1960, he created Chris Ogunbanjo & Co; a commercial law firm considered to be the building platform for many successful luminaries in Nigerian legal practice.

Ogunbanjo employed his profession, law, as a veritable instrument of change in the Nigerian Legal, Corporate, Industrial and Management Practice. Within a few years of specialising in Corporate Law, he was spotted and appointed “Retainer-Solicitor” to the NIDB Project by the Federal Government and International Finance Corporation. He was also part of several top companies such as West African Batteries, Metal Box Toyo, Union Securities, 3M Nigeria, ABB Nigeria, Roche Nigeria and Chemical and Allied Products Limited.

Ogunbanjo got married to his wife, Hilda Ladipo in 1953. She was editor of AMBER, a women's lifestyle magazine established in the 1960s. He has his home in Lagos State.

No reviews yet for Chris Ogunbanjo 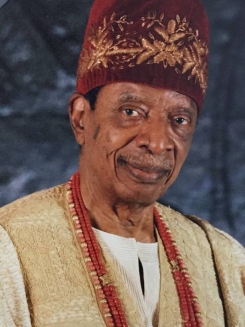