Aminu Tambuwal is the current governor of Sokoto State. He was born into the noble family of the Waziri of  Tambuwal, in Tambuwal village, Sokoto State on January 10, 1966.

He attended Tambuwal Primary School, Tambuwal, Sokoto State, where he obtained his First School Leaving Certificate in 1979 and then proceeded to Government Teachers’ College, Dogon-Daji, where he obtained the Teachers Grade 11 Certificate in 1984. He then went to Usman Dan Fodio University, Sokoto, where he studied Law, graduating with an LLB (Hons) degree in 1991. He completed his one-year compulsory legal studies at the Nigerian Law School, Lagos, obtained his BL and was called to the Bar in 1992.

He has attended many international professional courses workshops abroad as a professional.

Tambuwal started learning the political ropes from 1999  while working as Personal Assistant on Legislative Affairs to Senator Abdullahi Wali, the then Senate Leader. Senator Wali is his brother in-law.

Having edified himself in Legislative proceedings, Tambuwal decided to contest for the legislative seat to represent Kebbe/Tambuwal Federal Constituency in the 2003 elections. He was successful  and was elected into the House of Representatives on the platform of the All Nigeria Peoples Party (ANPP).

Few months to the 2007 general elections, he defected to the Democratic People’s Party (DPP), alongside the former governor of Sokoto State, Attahiru Bafarawa. But when the DPP denied return tickets to former ANPP legislators, Tambuwal swung back to the ANPP, where he eventually succeeded in picking up a ticket for the election and was successfully re-elected for second term.

Tambuwal defected again from the ANPP and this time joined the ruling Peoples Democratic Party in 2007.

Tambuwal has held several offices in the Lower House. In 2005, he became the Minority Leader of the House until he defected to the PDP. Upon his re-election to the House in 2007, he was elected the Deputy Chief Whip.

At various times, Tambuwal has been a member of several committees including the House Committee on Rules & Business, Communications, Judiciary, Inter-Parliamentary and Water Resources. He was also a member of the House Ad hoc Committee on Constitution Review.

Aminu Tambuwal was re-elected for the third time in a row as the legislator representing Kebbe/Tambuwal Federal Constituency in the 2011 general elections on the platform of the PDP. In June of the same year after a fiercely fought out election in the Lower House, he was successfully elected the Speaker of the House of Representatives.

Not new to party defections, Tambuwal defected the ruling  Peoples Democratic Party to the All Peoples Congress in October 2014 in preparation for the 2015 General elections where he had the aspiration to contest for the Sokoto State governorship position.

In April 11, 2015, Tambuwal contested and won the Governorship election of Sokoto State. He was inaugurated on 29 May 2015

Tambuwal has been a very active member of the Nigerian Bar Association (NBA), over the years.

He started off as Public Relations Officer of the NBA, Sokoto State chapter between 1996 and 1997.

From 2000 and 2002, he was the 1st Assistant National Secretary of the Association. He is also a member of the Body of Benchers, Nigeria; International Bar Association, and the American Bar Association among others.

No reviews yet for Aminu Waziri Tambuwal 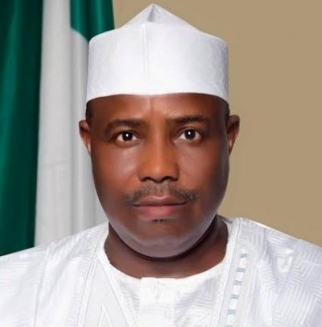