Francis Asekhame Alimikhena was born on October 18, 1947. He hails from Igiedo in Estako East Local Government Area of Edo State.

Francis had his secondary education at St. Thomas Secondary Modern School and later proceeded to the University of Buckingham United Kingdom where he graduated with a degree in Law. He was later called to the Nigeria Bar as a Solicitor and Advocate of the Supreme Court of Nigeria.

Prior to studying law, He joined the Nigerian Army as a Commissioned Officer in 1972 and retired as a Major in the year 2000.

In 2007 he contested on the platform of the Peoples Democratic Party (PDP) in Edo North Senatorial District. But unfortunately lost.

In 2011, when the fortunes of PDP were dwindling in the state he was again approached to come out and contest, he contested but lost again for the second time.

He thereafter defected to the All Progressives Congress(APC) an in the 2015 general elections, he again contested for the senatorial seat with the APC ticket this time and won, thereby becoming the senator representing Edo North Senatorial District.

His victory at the 2015 senatorial elections has drawn the attention of the whole nation as the most unique victory in the political history of the All Progressive Congress (APC) as he is the only elected Senator in the entire South South and South Eastern part of Nigeria, elected on the platform of the All Progressives Congress.

Alimikhena currently holds the position of the Deputy Chief Whip at the National Assembly.

No reviews yet for Alimikhena Francis 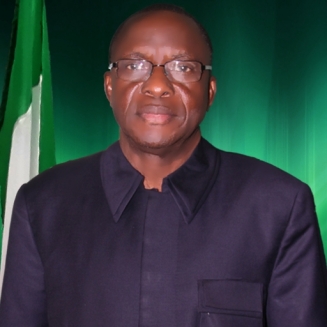