Dino Melaye is a senator of the Federal Republic of Nigeria, representing Kogi West Senatorial District at the National Assembly. He was born in Kano on January 01, 1974.

Dino completed his primary education at Gandun Nasarawa Primary School Kano where he held the posion of headboy. He was a boy as well in his secondary school.

After his secondary education, he gained admission into Ahmadu Bello University Zaria, where he obtained a Bachelors degree in Geography.

As a student, Dino was a Student Union Leader at the Ahmadu Bello University Zaria. He eventually became the leader of the National Association of Nigerian Students (NANS). After which he became the Secretary General of African Youth Council and later held the same position for the Common Wealth Youth Council.

These positions won him the African Youth of the Year Award among many other citizens  of 54 competing African countries in the year 2005 after which he was appointed by President Olusegun Obasanjo as the chairman of the the Presidential Advisory Council on Youths.

Dino was elected member of the House of Representative, to represent Kabba/Bunu/Ijumu Federal Constituency in the 2011 general elections.

He became popular for his loud and vocal criticism of the president Goodluck Jonathan's administration while he was at the Lower House.

On April 28, 2015, Deno Melaye  contested and won the election as senator representing Kogi West Federal Constituency on the platform of the Peoples Democratic Party (PDP). He was inaugurated as member of the Senate on June 9, 2015. He was the Senator who seconded the nomination of Senator Bukola Saraki as candidate for the office of President of the Senate after Saraki was nominated by Senator Ahmad Sani.

Dino Melaye is currently unmarried. He was previously married to Tokunbo Melaye for 10 years.

She filed for divorce after a domestic violence dispute where she claimed that he beat her up and pointed a gun at her.

Dino later moved in a woman named Alero Falope into the home that he once shared with Tokunbo, but the relationship did not live long as Falope moved out six months later.

Dino has 4 children, 3 from his union with his ex-wife Tokunbo, and another child with an unnamed woman in July 2016

No reviews yet for Dino Melaye 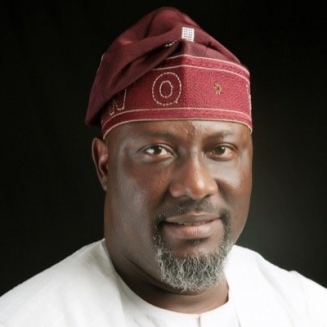