Alhaji Bukar Abba Ibrahim is the senator representing Yobe East Senatorial Zone at the National Assembly. He was born on October 11, 1950. He was governor of Yobe State from 29 May 1999 to 29 May 2007. He also served as governor of the state from January 1992 to November 1993.

Bukar Ibrahim began attending primary school in 1957. In 1965, he proceeded to Government College in Maiduguri where he obtained his West African School Certificate Examination in 1970. He was proceeded to the Ahmadu Bello University in 1972 where he obtained his Bachelor of Science degree in Quantity Surveying in 1975. He went for a Post-Graduate professional training in the United Kingdom from 1981 to 1982, after which he earned the qualification as an associate member of the Nigeria Institute of Quantity Surveyors.

From 1985 to 1988, Ibrahim worked as a civil servant in Borno State eventually becoming Commissioner of Works.

In December 1991, a few months after Yobe State was created, Ibrahim contested and won the gubernatorial election with the Social Democratic Party (SDP) ticket. He held that position until November 1993, when the military took control of government.

Nigeria transitioned from military to civilian rule beginning in late 1998. Gubernatorial elections were held in January 1999 and Ibrahim was again elected governor, this time on the platform of the All People's  Party (APP), and took office on 29 May 1999. The APP was later renamed All Nigeria People's Party (ANPP) due to a factional split. He was re-elected in 2003 for a second four-year term and was one of only four incumbent ANPP governors to maintain their positions.

During his first term, on 5 August 1993 Ibrahim split the state's four emirates into 13. This change was reversed by the military regime of Sani Abacha. In his second term after the return to democracy, on 6 January 2000, he re-implemented the new emirates, adding Gazargamo, Gujba, Nguru, Tikau, Pataskum, Yusufari, Gudi, Fune and Jajere. The Emir of Fika, Muhammadu Ambali, protested at the break-up of his emirate and took the government to court, but eventually accepted the change.

In 2007, he was elected to the Senate for the Yobe East constituency. He ran for re-election in the 9 April 2011 Senatorial contest for Yobe East on the ANPP platform, and won against former Senator Lawan Jalo Zarami of the People's Democratic Party (PDP).

Bukar Ibrahim was again re-elected for the 3rd time during the 2015 general elections. This time on the platform of the All Progressives Congress (APC).

No reviews yet for Bukar Ibrahim 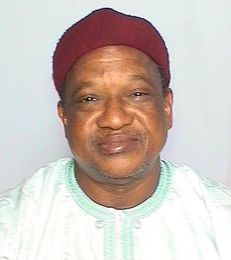