Senator Joseph Obinna Ogba was born in 1961. He is a Senator of the Federal Republic of Nigeria representing Ebonyi Central Senatorial District.

He attended Command Secondary School Nkalagu where he obtained his General Certificate of Education in 1975. He as well obtained a Diploma and Higher National Diploma in Mass Communication from Federal Polytechnic Oko.

Ogba worked with the Nigerian Police Force from 1981 to 1996 when he retired as a Sergeant in the Force.

He then ventured into politics, becoming the Chairman of Ishielu Local Government Council from1997 to 1998.

He was also the 1st Vice President of the Nigeria Football Federation from 2010 to 2015.

In the 2015 National Assembly elections, Joseph Obinna Ogba contested for the senatorial seat of Ebonyi Senatorial District and won on the platform of the Peoples Democratic Party.

No reviews yet for Joseph Ogba 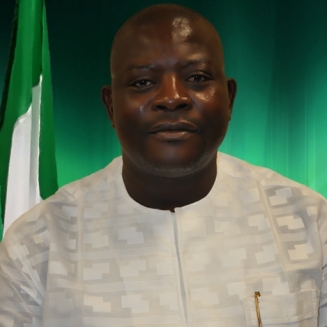