Immediately after rounding off on his Masters programme, Abaribe got a job as a lecturer at  the Edo State University and worked there from 1982 until 1985.

In 1985, Enyinnaya became the Area Manager For Southern Nigeria at SCOA Nigeria, a position he held until 1991 before becoming the NICON Senior Manager For Investment, a position which he held for one year.

In 1993, Abaribe became the CEO of Integrated Mortgage Co, a position he held until the year 1995.

With the return to democracy in 1999 and following the general elections, Orjizor Kalu won the Abia State Governorship elections with Abaribe as his deputy.

Abaribe was impeached and restored as the Deputy Governor of Abia State twice in the year 2000 and while plot for his third impeachment was brewing, he resigned on March 7, 2003, sending his resignation to the State House of Assembly. Nevertheless, the Abia State House of Assembly still went ahead to vote him out of office several days after receipt of his resignation letter, an action that Abaribe described as "Medicine after death" .

In 2003 Enyinnaya Abaribe contested for the Gubernatorial election on the platform of the All Nigerian Peoples Party (ANPP), but lost to Orji Uzor Kalu his former boss.

Subsequently, in 2007 Enyinnaya Abaribe was elected as a Senator representing Abia South Senatorial Zone at the National Assembly on the platform of the People's Democratic Party (PDP).

In October 2007, Abaribe led six other senators from the South East of Nigeria to negotiate the release of Ralph Uwazuruike, leader of the banned  Movement for the Actualisation of the Sovereign State of Biafra (MASSOB), who then was on trial for treason at the Federal High Court in Lagos to demand his release.

Following his first stint at the National Assembly, Abaribe has succesfully been re-elected two times, in the 2011 and 2015 elections respectively, all with the ticket of the Peoples Democratic Party (PDP).

Abaribe is currently the chairman Senate Committee on Information and National Orientation.

Senator Abaribe is married to Mrs Florence Nwamaka Enyinnaya Abaribe and their union is blessed with three children.

No reviews yet for Abaribe Enyinnaya 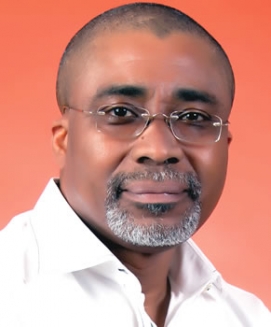