Ali Ndume attended Gadamayo Primary School in Gwoza and completed in 1972 and then proceeded to Comprehensive Secondary School Mubi in then Gongola now Adamawa State from 1973 to 1978 and obtained his Secondary School Certificate and WASC.

He was also admitted into the Phi Kappa Phi academic society for outstanding performance.

After completing his NYSC at Federal Polytechnic Ilaro in Ogun state, Ndume joined Ramat Polytechnic Maiduguri as a lecturer in 1983 rising to the rank of a Senior Lecturer.

In 2003, Ndume was elected to represent his people for the seat of Chibok/Damboa/Gwoza Federal Constituency in the House of Representatives on the platform of ANPP and served for two terms from 2003 to 2011

Ndume defected to the PDP in December 2010, a few months to the 2011 general elections.

He ran for the Borno South Senatorial position with the ticket of the PDP and emerged winner in the 2011 elections.

He was re-elected in the 2015 Senatorial elections on the platform of the All Progressives Congress which he joined with a host of other disenchanted PDP members in 2014.

In March 2017, Ali Ndume was suspended for six months by the Senate Committee on Ethics and Privileges headed by Senator Anyanwu, for calling for a probe into the allegations of imported bullet proof range rover with fake documents involving Senate President Bukola Saraki seized by the Nigerian Customs and that of perjury involving Senator Dino Melaye.

After exonerating both Mr. Saraki and Melaye the Committee recommended a one year ban to Mr. Ndume claiming the former Senate Leader failed to conduct proper investigation before making the said allegations. In a swift response Mr. Ndume denied making any allegations against anybody.

However eight months after his suspension, he was recalled to the National Assembly by the Senate.

Senator Mohammed Ali Ndume is married to Justice Aisha and Hajia Maryam and blessed with 10 children.

No reviews yet for Mohammed Ndume 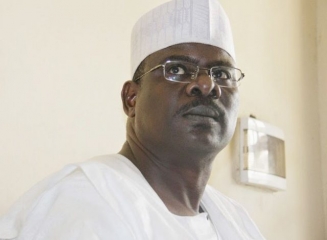